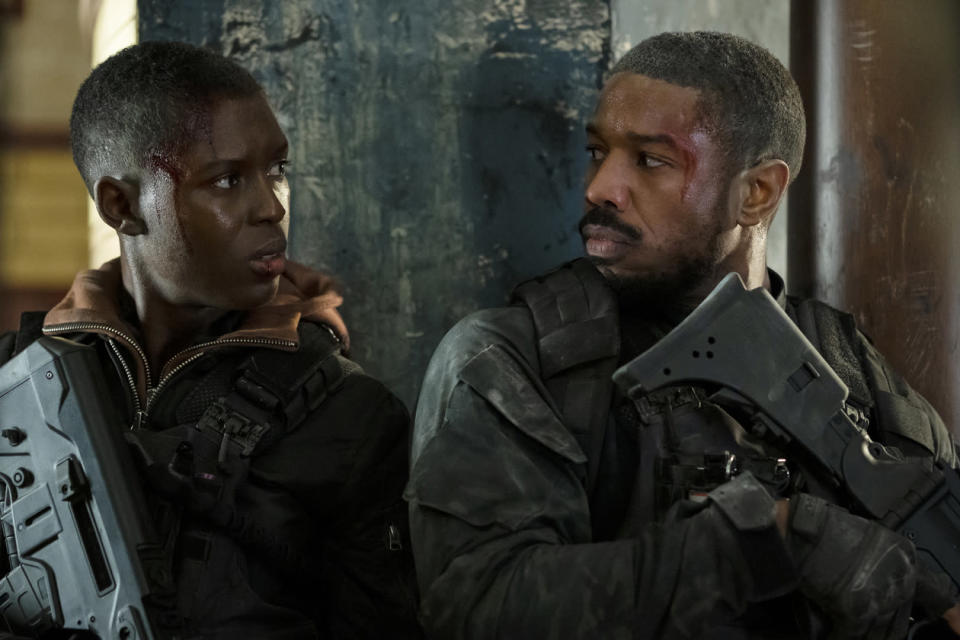 It makes sense that Without Remorse has the same director as Sicario: Day of the Soldado, and the same writer too; neither films are any good.  In Taylor Sheridan’s defense, he started well: Sicario, Hell or High Water, Wind River.  But he’s kinda sucked since then: Day of the Soldado, Without Remorse, Those Who Wish Me Dead.  The pair team up together again here, and, honestly, with worse result, as even Michael B. Jordan & Tom Clancy can’t save the day.  What a disappointing movie, for such a anticipated event, a let-down from any angle.

Navy SEAL John Kelly takes part in a rescue mission in Syria, only to find his world turned upside down as a direct result of his role there.  His team is murdered, his wife is accidentally killed, and Kelly himself is shot multiple times, though he survives and vows to find the killers.  But the CIA isn’t being very helpful; they want the matter closed, for reasons they won’t disclose.  So Kelly goes rogue, and attempts to find the men responsible himself, even if it means abandoning his commanders, his country, his humanity, and everything he once held dear.

MBJ is a stud, he’s a great actor, and I always like seeing him.  That said, he’s no good here.  Or, perhaps more specifically, his character is no good here, as each line, mannerism, and choice seem manufactured from random keys being punched on a broken typewriter.  The writing & dialogue of Without Remorse are so horrible that you’d swear it was a joke, a mockery of the genre, or at least you hope someone was having fun at someone’s expense, because otherwise …yeesh.  Pretty shocking from Sheridan, who can be a good writer; maybe not so shocking from Sollima, who must not be a very good director.  And the cast was …questionable: Turner-Smith, Billy Elliott, Guy Pearce, no one else for more than three seconds.  I didn’t care about Kelly, I didn’t believe the plot, and if another cliche crept up behind me I was gonna scream.  I recommend that you pass on the movie, maybe just read the book, if you’re a big Clancy fan; otherwise just pass all together.