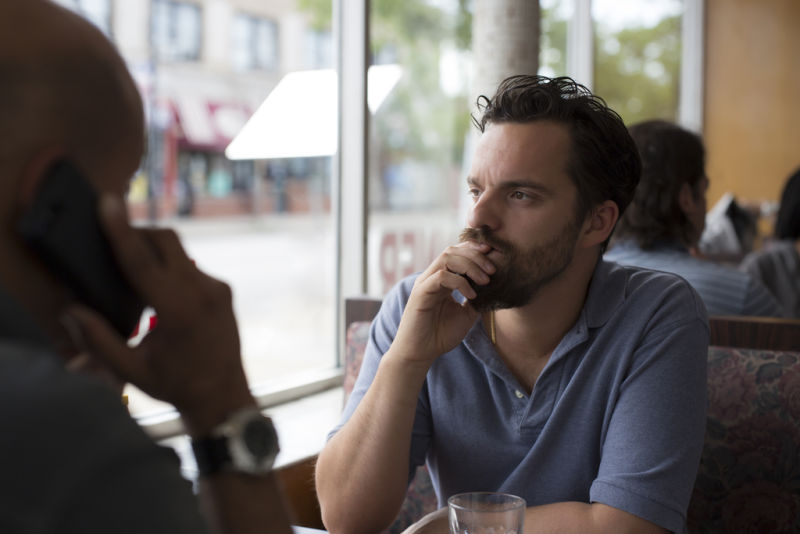 I like Joe Swanberg’s shit, I really do, but when this movie was announced, I wondered if he was running out of steam.  Drinking Buddies, Happy Christmas, Digging for Fire, Easy (TV series); all a little worse than the one before, and I was worried that Win It All would just continue the trend.  I’ve been noticing that Netflix is developing a “type”, and this movie fits right into that emerging mold, the nutty crime/comedy, but its ceiling projected to be incredibly low, its story predictable, its heart missing, and I was fairly certain that I wouldn’t care for it.  Turns out, Swanberg is back with a vengeance, and Jake Johnson is here to prove that he’s still an indie force to be reckoned with.

Eddie is addicted to gambling.  He’s a nice guy, a good friend, but god is he irresponsible.  He works parking cars for the Cubs to make enough money to blow in speakeasy-style casino dens, but can’t buy food at his local bodega, since he never actually wins any money.  Basically, Eddie is the last person you’d trust with your dough, but that’s exactly what’s about to happen, with disastrous results.  A crook friend of his is about to “go away for a while”, so he gives Eddie a bag to watch for 6-9 months.  The bag contains a boat-load of cash, which Eddie then gambles away.  He’s a dead man who just hasn’t dropped yet, and yet he still has time to pick up a girlfriend, get a job, and take an unlikely liking to responsibilities, creating a conundrum that won’t be easy to solve.

Swanberg gets it right this time after a couple disappointing outings, his patented style lending itself to this plot in a way that was refreshing to watch.  If you don’t know much about the Chicago-area director, he deals in improv, letting his actors work through the story’s problems organically.  It’s pretty cool, I love watching professionals pick their way through these characters, and I’m not sure anyone does it better than Jake Johnson.  He is the movie, his idiosyncrasies making it work, and his loveable persona drawing you in.  Key is surprisingly good as well, though the other side characters weren’t really important, and some of them weren’t actually very good.  Johnson will win you over, which is the point, and it’s nice to see Swanberg hit his stride again, so definitely check out this Netflix original, one of the best they’ve produced to date.