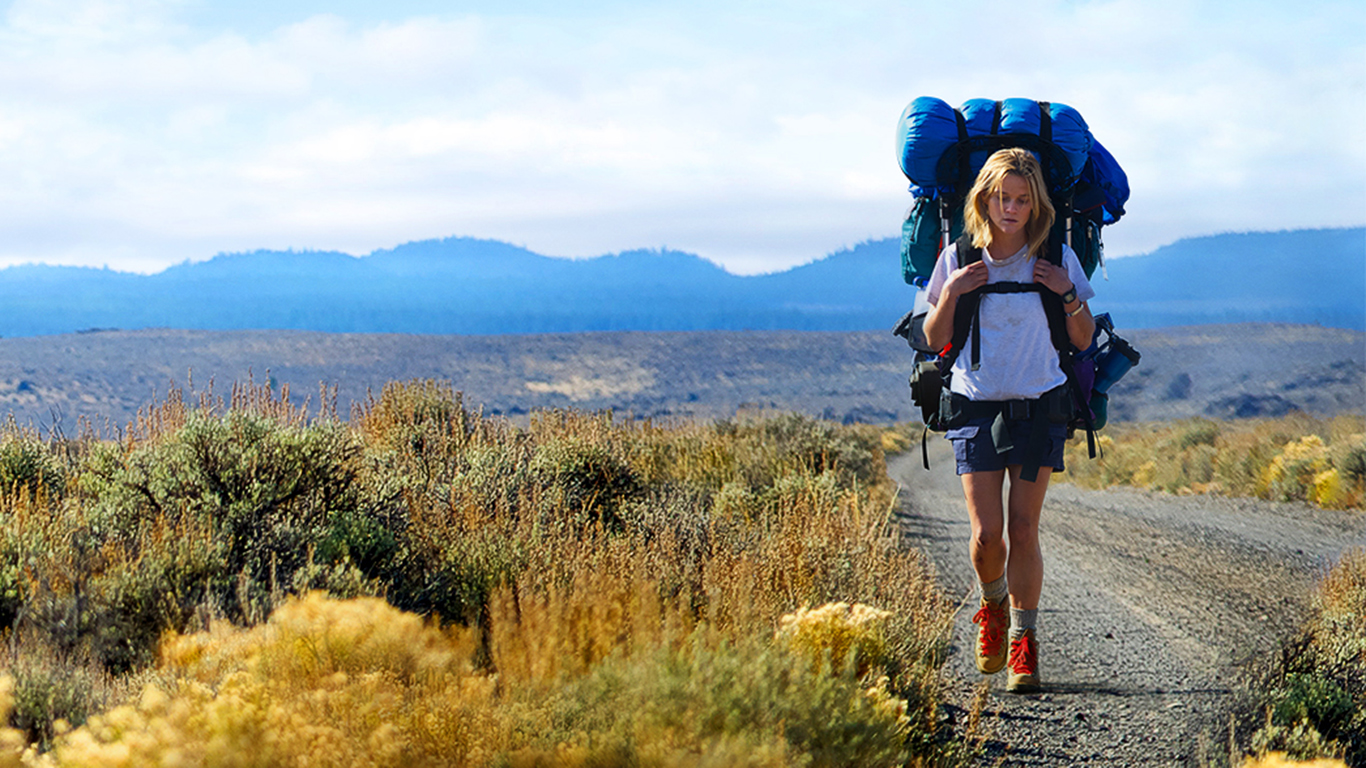 Reese Witherspoon has never been what you might call a big hitter.  Sure, she’s been around for years and we all feel like we know her, but she’s the ultimate girl-next-door; not seen as a sex symbol but also not seen as this amazing actress.  Perhaps it’s the way she looks, the skinny girl with the pointy chin and the odd way of talking who seems precocious but not exactly hot.  Or perhaps it’s her choice of roles, with movies like Overnight Delivery, Legally Blonde, Sweet Home Alabama, Just Like Heaven, and Four Christmases turning us off from the fact that she has real ability.  And she definitely does, just watch her in something with a little more substance, like Election, American Psycho, Walk the Line, or Mud.  She won an Academy Award for her portrayal of June Carter alongside Joaquin Phoenix as Johnny Cash, proving that she’s a tiny tornado of talent when she picks the right project.  Wild fits that description, a film that allows Witherspoon to shine rather than phone it in, a movie with a role that suits her perfectly and could win her another Oscar.

This is the true story of Cheryl Strayed, a woman who embarked on a thousand-mile journey along the Pacific Crest Trail in an attempt to find what had been lost.  In her past life, Cheryl was a feminist intellectual, attending college alongside her mother, who she also lived with and looked up to.  Her family had escaped from an abusive father years before, living a poor but happy life, taking strength from a mother who always looked on the positive side of life, even when battling a terminal illness.  Cheryl’s life began to spiral out of control after the passing of her mother, after turning to drugs & sex for comfort, after giving up on a marriage that had made her so happy.  To find the woman she one was, Cheryl leaves everything behind, loads up her backpack, and hikes into the wilderness, hoping to return a changed person, having put her grief aside and discovered the best path. It’s a heavy story that never lets up.  It’s about heroin, random sex, death, giving up, hating yourself, and betraying those you love.  Not easy to stuff to watch, but the honesty of the film and the hope for something better make it bearable and even uplifting in a very strange way.  I say the film is honest, and that’s one of the biggest compliments I can give.  It doesn’t shy away from the darker parts of the story, doesn’t gloss over the mistakes & choices this character made that really paint her in a horrible light.  Because of this sincerity, we as audience members are allowed to judge Cheryl harshly, but then to understand her as well.  I can imagine writing the book this movie is based on must have been a horribly difficult task, baring your imperfect soul to the world and talking candidly about the abuse you put your body and your loved ones through.  But in the end, it’s a story of redemption, of knowing what you did wrong, putting that behind you with no excuses, and moving forward, since, after all, what else can you do?

This was a role tailor-made for Witherspoon and crafted in a way that allowed her best.  She took the project entirely on her shoulders, with her mother being the only other character that had any significant lines or impact.  For her part, Laura Dern might deserve a Best Supporting Actress award, as this is the best I’ve ever seen her on screen.  Witherspoon most definitely deserves a shot at Best Actress for a performance that could not have been easy.  She totally abandoned her good-girl image, not transforming like Charlize Theron in Monster perhaps, but becoming someone else in way that was authentic and believable.  She also didn’t shy away from the hard stuff, showing us drug use, sex addiction, self-hatred, and horrible irresponsibility without flinching and without embarrassment.  This film is about two things: the power of the true story and the incredible acting of Reese Witherspoon.  Both came together seamlessly, making Wild a must-see.