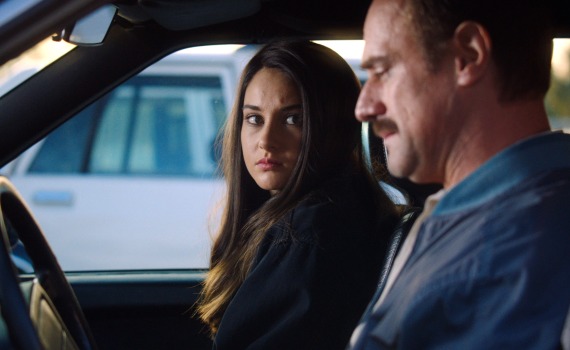 Shailene Woodley is making the most of her 20s.  A television actress since the age of 8, she finally took the leap into mainstream cinema in 2011 with The Descendants and has yet to cool down.  The Spectacular Now, White Bird in a Blizzard, Divergent, The Fault in Our Stars, and the upcoming Insurgent & Allegiant; Woodley is Hollywood’s ‘it girl’ right now and has shown no signs of slowing down.  Her lead roles have all been teen-oriented so far, with either emotional love stories or the Hunger Games-esque dystopic trilogy that’s launching her into household name status.  This film marks her first “grown up” picture, although she plays a high schooler.  It’s an American Beauty role that could prove to audiences that’s she’s not just another pretty face, that she’s more than a tween superhero, and that her acting ability is something to be remembered.

This is the story of the Connor family and the events that broke it.  Kat grew up an only child in the 70s and 80s to a pair of unlikely parents: Brock the mild-mannered hard-worker & Eve the disappointed ice queen.  Now, as the 80s come to a close, Kat is all grown up, about to graduate high school, has blossomed into a beauty, wants her freedom, and has no respect for either of her parents.  They don’t seem to like each other much either actually, and when Eve Connor disappears without a trace one random day Kat isn’t all that broken up about it.  Brock seems to be, although his wife has openly despised him for years.  For Kat, this is just another weird episode in an odd life, and more important things demand her attention; getting laid, going to college, seeing her friends.  But as questions begin to arise surrounding her mother’s disappearance, she is forced to face the truth, forced to find the truth, before life can continue down its twisted path.

I think it’s time to say that Shailene Woodley is here to stay.  She doesn’t exactly have the star power of Jennifer Lawrence, who does, but she’s a force to be reckoned with and someone we’ll be seeing in a film or two every year for the next twenty.  First off, she’s gorgeous.  She’s a little less approachable than JLaw but more so than Anne Hathaway, a pretty brunette who has a screen presence that holds your attention.  And in this film she’s quite naked, trying to make an impression as so many young actresses have done before, letting us know that she’s fulfilled the Hollywood rite of passage and is ready for the big time.  A little grotesque that that’s the way it is, but hey, that’s the way it is.  So she’s proven her adulthood, but she’s brought her talent along to back it up.  She plays Kat well, with a casual teen attitude that says nothing matters but everything matters.  When alongside Meloni & Green she holds her own, while when alongside her friends (Precious, where you been girl?!) she blows them out of the water.  The film rides on Woodley’s shoulders since the plot is basic, the feel a little amateur, and the energy quite low.  But she’s there to hold it up, even when the story falters, making White Bird in a Blizzard a mediocre film that stars a future mainstay.