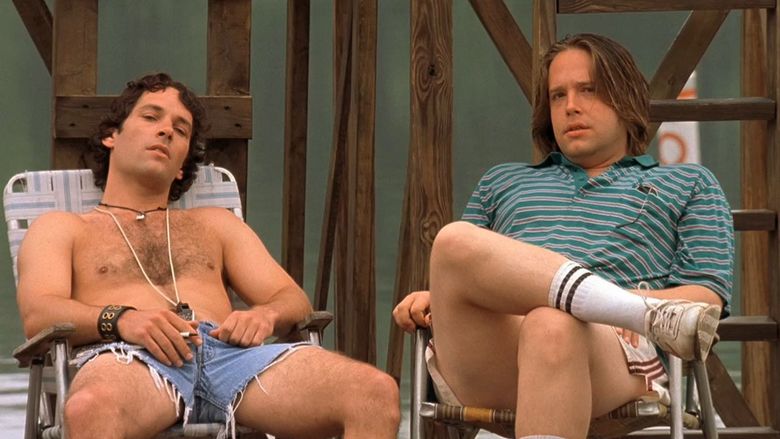 The definition of a modern cult classic, Wet Hot American Summer is as blatant as its name suggests and as good as its deserved description.  Directed by David Wain, who would only go on to do terrible things (Role Models, Wanderlust, They Came Together), this film marks the pinnacle of one man’s career and the benchmark for all other spoof comedies.  It takes everything we love/hate about campy 70s & 80s films, throws it in our faces, drowns us in bug juice, and keeps us thirsty for more.  It holds itself back from the blood and boobs of the horror genre, and concentrates instead of Jew jokes and raging hormones.  I don’t know about you, but that combination is funny to me, making WHAS a must-see comedy

At Camp Firewood on the last day of summer 1981 in rural Maine, both campers and counselors alike are determined to have one last burst of fun, and one last cabin hookup for good measure, if they can manage it.  Camp is all about the great outdoors, the great memories you’ll take with you back to New Jersey, and the summer romances you can brag to your friends about, whether they were real or not.  And as the talent show looms, the big event of the season, everyone scrambles to practice, make out, and almost drown one last time.  Even the camp director isn’t immune to the love bug, or at least the lust tick, falling hard for the astrophysicist next door.  This last summer will surely be American, hot, and, wait for it, wet.

The first and probably best thing about this movie is its cast.  Just look at these names: Garofalo, Hyde Pierce, Paul Rudd, Christopher Meloni, Molly Shannon, Ken Marino, Michael Ian Black, Amy Poehler, Bradley Cooper, Elizabeth Banks, Judah Friedlander.  They make the movie, with their idiotic characters and unique comedic styles.  Paul Rudd especially, who very nearly steals the show, only held off by the hilarious relationship between Garofalo and Hyde Pierce.  But it’s an ensemble cast, an insane group comedy, and one giant mockery of the genre.  Yes, it goes over the top on occasion, but that can be forgiven, since the style that it’s spoofing has no top bar at all.  Fun, silly, messy, wild, and surprisingly smart at surprising times, WHAS really is a modern gem that’s so incredibly dumb you just can’t stop yourself from applauding.