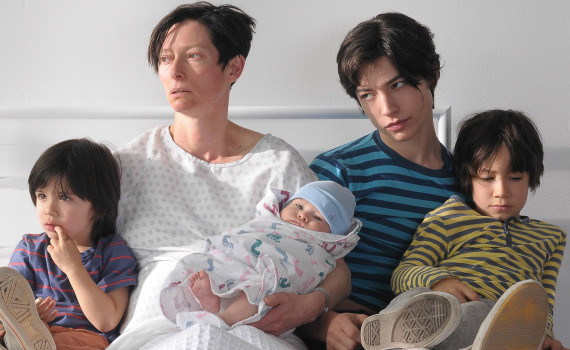 About ten minutes into We Need to Talk About Kevin, I had already decided that I hated it.  As with opening a novel, it’s not my job to get hooked, it’s the author’s job to hook me.  A few pages in I should already be invested, interested, curious, and have some idea what to expect going forward.  The same goes for movie; the director must catch our attention early or he/she risks losing the audience almost immediately.  Not fair perhaps, not universal, but pretty realistic, and I’ve seen it happen over & over again.  This film started out so obscurely, so disjointedly, that I was instantaneously turned off, which is a failure on the part of the filmmaker.  Thankfully, things got better and a 2-star movie became a 5-, but a little of the damage had already been done.

Eva & Franklin were free-spirits in their youth, traveling the world, loving the city life, dancing in the rain.  Their first child changed those things dramatically, all the more for the strange relationship that developed between mother & son.  Kevin wasn’t a pleasant child, screaming continually, refusing to speak, showing autistic tendencies by choice rather than diagnosis.  He wouldn’t potty train, wouldn’t say ‘I love you’, wouldn’t connect, destroyed everything, and seemed to constantly enjoy making his mother’s life terrible.  Perhaps she should have known that disaster was imminent, and perhaps she did, but a husband for whom the boy always put on his best face and who always made excuses for the son he naturally loved didn’t help the situation much.  In the end, it wasn’t a surprise when the entire family’s world came crashing down.

This movie is a great example of how a mistake at the beginning can derail the idea you’re trying to realize as a director. The introduction was sloppy, all over the place, unsettling, and failed to do its job, which was to show us pieces of the story before everything was put in its proper place.  It wasn’t until the action became more linear, at least in chunks, that the film picked up and I began to forgive it for its early problems.  By then, I was slightly back on board, and was able to enjoy the movie, or rather appreciate it, since there’s not much to enjoy here.  Not a horror movie and not a drama, this film is instead a message to society, telling us that we need to notice & discuss the problem before the problem explodes in our faces.  I got that message by the end, and good performances from all three leads helped in my final rating of the film, but overall this isn’t exactly a story anyone falls in love with.  Rather, it’s a heavy does of truth.