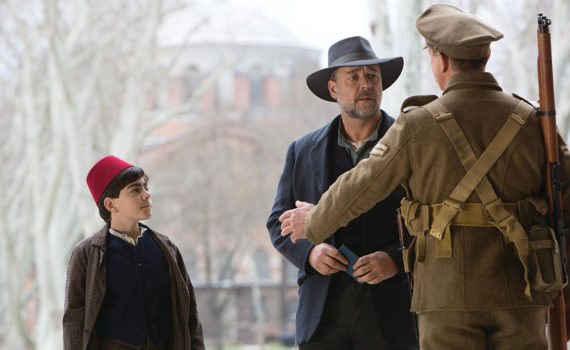 The Water Diviner is one of the cheesiest movies I have ever seen.  It’s every movie cliche you can think of wrapped up in 100 minutes and served to you with absolutely no beverage to wash it down.  That much cheese is hard to swallow, the result of which is a constant gagging and a promise to yourself that you’ll never do this again.  Sadly, I was indeed subjecting myself to torture a second time, having experienced the same feeling after watching Russell Crowe’s Robin Hood, though Ridley Scott directed that heap, not Crowe himself, as is the case here, so maybe I shouldn’t judge myself too harshly for not seeing it coming.  Let this be my warning to you though; don’t watch any more heavily accented, Russell Crowe, historical epics.  They suck.

An Australian man by the name of Joshua Connor loses three sons in WWI and later his still-grieving wife to suicide.  Her horror was based largely on the fact that she & her husband never received the bodies of their dead children, that they went away to the other side of the world never to be seen again, that there was no closure & no peace.  So, Connor, who has always had a knack for finding water in the outback, sets out for Turkey to the site of the Battle of Gallipoli to try his luck at finding three skeletons among thousands.  After meeting a lovely lady in Istanbul, Joshua begins to understand that what he’s searching for is the healing of the wounds within himself, something gravestones can never bury.

Ugh, it’s that awful.  Slow-mo battles, charging through trenches, bloody deaths, brotherly heroics; and that’s just in some flashbacks.  The rest is just as bad, cheesy line after cheesy line forced out of the mouth of an admittedly talented actor who had no place being in this movie.  Well, he was the director I guess, who was gonna tell him that both he & the film itself were horrendous?  Crowe’s Australian accent was terrible, as was Kurylenko’s Turkish.  Every character was an insulting stereotype, every shot hand-crafted to be sappy to the max.  Add in a little boy to break your heart, an ancient enemy to change your mind, a beautiful woman to wash your cares away, a rebellion that of course Connor has to help with, stuffy British officers, second sight appearing just when it’s needed most; really, I don’t know how much more I could have taken before getting sick.