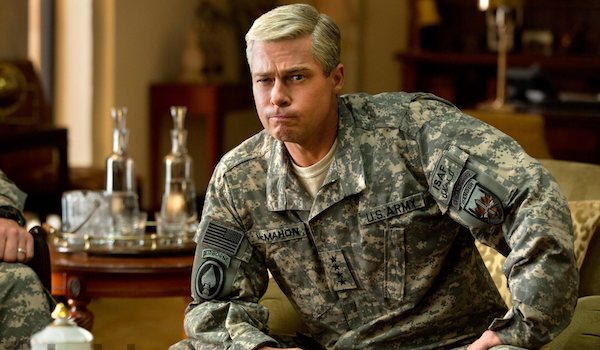 A mix between Burn After Reading and The Big Short, Netflix’ newest attempt at becoming a legitimate film studio is its best yet.  War Machine is a mix of funny and depressing that works, at least for those who live their lives in a constant state of cynical funk.  Count me in that group, and I can’t imagine that there are too many people in our current world/culture/country/society who feel completely optimistic and peppy.  Netflix succeeded with original shows, they have been dabbling in original movies, but this is their first large-level success, with a huge star and a great result.  War Machine is good enough for theatres, good enough to recommend, and good enough for you to devote some time.

War; what is it good for?  Some would say absolutely nothin’, but not General Glen McMahon.  Big Glen, as he is affectionately known, loves war, and is absolutely wonderful at it.  He succeeded in Iraq where America was bogged down in an insurgency, and now his specific skills are needed in Afghanistan, where a war wages on against a ghost-like enemy.  Glen will win it at any cost and doesn’t know the word ‘lose’, even if he gets no help from the local government or even from his own President.  His unique style of commanding might not be for everyone, but the Glenimal gets the job done, and all his adoring soldiers say “Oorah!” to that.  The only thing standing in his way is actually finding the enemy, a detail that definitely won’t stop this rampaging war daddy.

Under the comedy, which is rich, there are volumes being said; about our government, our wars, the men who lead them, and the pointlessness of a negative experience that you learn nothing from.  This seems to be a bipartisan issue to me, but maybe I’m naive; that these wars in these countries led by these people are as fucked up as can be imagined, that there’s no such thing as winning in modern terror warfare, and that you’d have to be crazy to try.  Pitt plays crazy perfectly, and his comedic timing in this film is excellent.  The funny is mostly at the beginning, much of the middle is just sad, but ultimately this is a comedy with a lot of serious things to say.  The cast impressed me, an ensemble like you rarely see: Pitt, Hall, Magaro, Emory Cohen, Topher Grace, Alan Ruck, Will Poulter, Ben Kingsley, Meg Tilly, Scoot McNairy as the narrator.  It’s an ambitious film, but definitely a strong showing for Netflix, and an enjoyable piece of dark comedy that I would watch again.