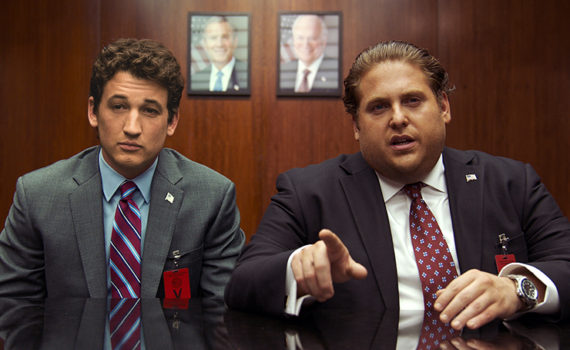 Road Trip, Old School, Starsky & Hutch, Due Date, and the Hangover trilogy; which of those movies was supposed to convince us that Todd Phillips could direct a true story about gunrunning and America’s Middle East wars?  He can direct a comedy, sure, his record has proven that, a few of his films even reaching cult classic status, if not exactly cementing themselves as legends.  But that’s only one small element of War Dogs, its comedy, the rest of the movie depending on much more.  The true story supports itself, so there’s another element that Phillips needn’t worry about, but that’s only two out of four, there are still two major factors left that need to be aced for this movie to be a success.  One is acting, which Phillips put into the hands of Teller & Hill, and the other is drama, which is Phillips’ responsibility to compose.  The acting & the direction failed this film, leaving the comedy & story to flounder, producing a mediocre movie at best.

After the Iraq war and the scandal concerning Haliburton’s rights in the Middle East, government contracts became available to anyone with the resources to fill them, not just corporations run by politicians.  Efraim Diveroli took advantage of this in a way no one else thought to, by scooping up the tiny contracts, making small profits, and turning around to do it again & again.  Not always by the most legal or moral means, Diveroli was on his was to rich quick.  He needed a partner, and who better than David Packouz, his former friend.  Packouz was a masseuse and a failed entrepreneur at the time, ready to get on board with Diveroli in whatever shady deals were available.  When the two stumbled upon a giant order that only their contacts could fill, a multi-million dollar deal with the Pentagon set them up for super stardom, but their questionable methods would ultimately lead to their demise. War Dogs tries desperately to be The Big Short and The Wolf of Wall Street, but it is neither, instead coming across as The Hangover IV: Albanian Warehouse.  What works is the comedy, which shouldn’t be forgotten in the final evaluation that this film isn’t that good.  The comedy is, and most if not all of that credit goes directly to Jonah Hill.  He has made a name for himself as the wise ass sidekick who takes no shit or the perfectly placed cameo that steals the show.  Cyrus, Moneyball, This Is the End, Wolf of Wall Street, Hail Caesar: he’s great every time he pops up in a film, the more surprising the better.  Add in a true story, an actual bamboozle that these two 20-year-old gunrunners almost got away with, and you’ve got two solid pieces to base a movie on.  Too bad the rest didn’t live up, or we’d be having a different conversation right now.

Miles Teller, though outstanding in the Oscar-shocking Whiplash, wasn’t ready for this role.  He doesn’t have what it takes, at least not yet, to support a film like this.  He’s not a leading stud, he’s not naturally lovable, he’s not hilariously funny.  That’s why Whiplash worked, everything was happening to him, he wasn’t happening to the world, which is the complete opposite of what was called for in War Dogs.  Teller failed to step up to the plate, becoming out-manned by Hill in every way, and even an extended cameo from Bradley Cooper couldn’t help.  He wasn’t aided by his director though, as Phillips fumbled with the true story and couldn’t quite seem to keep the drama of each moment steady.  He alternated between a drug movie and narrated crime, scrambling the styles until the pace was completely shot.  I wish this film had been in better hands, because the plot is fascinating & Hill shines.  But Teller doesn’t hold up his end of the bargain, Phillips isn’t a director who can successfully produce this genre, and War Dogs finishes in the middle of the pack.