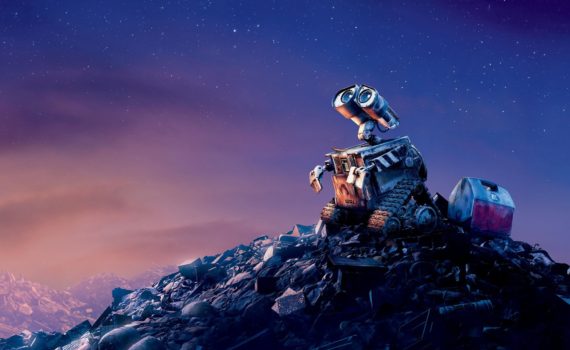 We all love Pixar films.  I’ve never met anyone, adult or child, who wasn’t thrilled or touched by one of their animated instant classics.  Whether it was Toy Story, Finding Nemo, or Up, there is just something about these movies that enthrall young audiences while captivating adults as well.  And while these movies are great, WALL-E is the one that got me the most.  It spoke to me in a way not many films have ever done, and left with that special feeling you get after watching something that you will never forget.

In a story that starts out with upbeat music and a picturesque view of Earth from outer space, things go downhill quickly.  We soon see that Earth is not what it once was.  Mounds of trash higher than skyscrapers dot the landscape.  Dust storms rage across barren land.  And humans have completely abandoned the planet.  All that is left are WALL-E units, whose job it is to clean up the mess.  As the recent history of a space-bound human race is told, we meet perhaps the last working sanitation robot and his cockroach friend.  Soon, WALL-E will go on an adventure that changes his world forever, becoming the last hope for all humanity.

It’s hard to put your finger on the exact detail that makes a movie phenomenal.  With only a handful of lines spoken in the entire film, WALL-E speaks to us on a different level.  From the way he loves others, to the music that means so much to him, to the way he views the world, this little machine has more depth of character than should be possible.  The ‘lessons’ in this movie are fairly obvious, and the humans are one dimensional, but it doesn’t seem to matter.  The feeling you get from start to finish is what’s important, and it’s both unexpected and uplifting.  You can’t watch WALL-E partly invested; it forces you to immerse yourself into a wonderful story, and you come out changed.