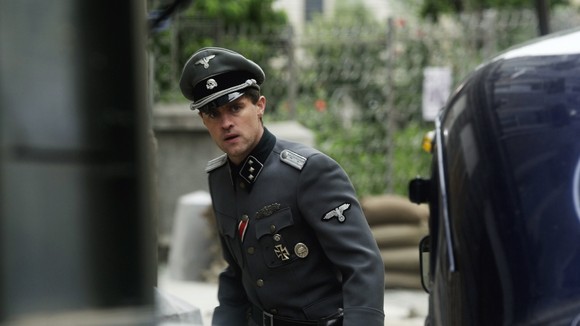 It’s always fascinating to have a different perspective on the Holocaust and its human stories; we are so inundated with WWII films that they can tend to become repetitive.  Still, audiences are quick to react positively to anything based on the time period, since it’s infused with so much inherent intensity that filmmakers hardly have to manufacture a thing, just plop us in the middle of a true tale and let us experience the historic drama ourselves.  Of course, not to minimize the horror of the Holocaust; that’s a rough job for a writer or a director, bring us into the reality of the situation, but don’t fall back on entertainment value, we don’t want to view those terrible events that way.  Walking With The Enemy does some right and some wrong, delivering a true and interesting tale, but often coming across as cheap, rather than rich with context.

Overwhelmed by the might of the Nazi army and the power of the Third Reich, Hungary joined in an alliance with Germany; placed between Germany and Russia it was pick one side and be attacked by the other, there were no other choices.  However, toward the end of the war, and with its own young men pressed into service and its own Jewish population sent to the work camps, the Hungarian government tried to leave and ally themselves with Russia, only to be stopped by the Nazis and forced into even greater danger.  Meanwhile, the families of the nation were being tormented in the struggle, ripped apart as the country itself was torn.  But some resisted, some fought back against the invading German army, and tried to save as many Jewish families as they could, forging Swiss documents and moving them to safe houses, even dressing up as SS officers in order to rescue the innocent.  This is a story of courage like you’ll rarely see, and from an angle that isn’t often viewed, which makes it all the more important.

Schmidt’s one and only film, Walking With The Enemy is more a good attempt than a great final product, a movie that delivers the information we want but in a format that’s a little underdeveloped, or perhaps just unsupported by talent.  I think I would have rather read a short story or essay about the heroes depicted here, about their bravery and the bravery of all involved in underground movements like this.  That courage during this time is unimaginable, putting your life on the line for others in the face of such madness, and we need to hear more stories like this to help us understand how quickly and easily an entire evil empire almost took over the world.  As far as the film goes, it could have been better.  The CGI was silly, the acting wasn’t great, the faces you recognize were only thrown in to get your attention, and the writing wasn’t strong either.  Everything was a little cheaply made, or perhaps rushed, maybe underfunded, who knows, but it felt amateur, which it was, so I guess there you go.  Others have covered this genre more solidly, but it was nice to get this unique perspective, so bravo to that; I just hope the next time this team takes a chance the results will be much improved.