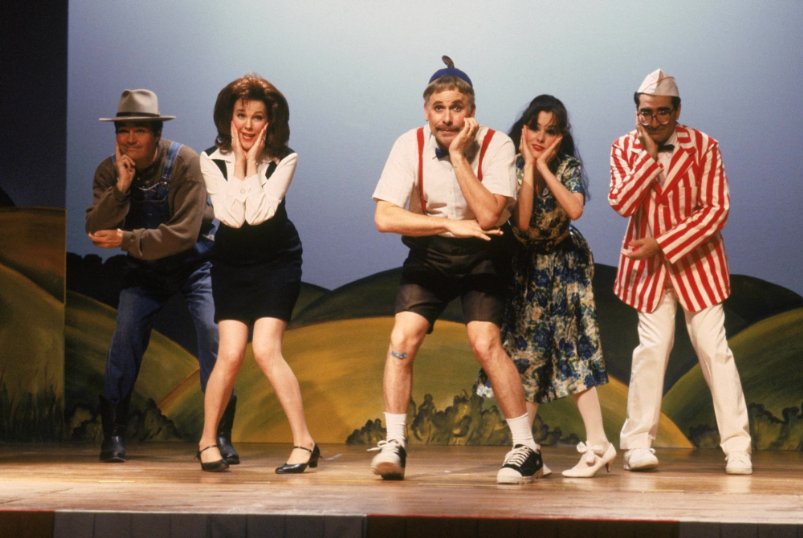 Although Spinal Tap is the genesis of the mockumentary group that would go on to create so many lovable comedies, Waiting for Guffman was the first directed by Christopher Guest.  Rob Reiner directed Spinal Tap and played the documentarian, while the newly-formed gang were the band members.  Christopher Guest, Michael McKean, Harry Shearer, Ed Begley Jr; this was the beginning.  Guffman sports a different cast, the guys not grouping back together until Guest’s third film, A Mighty Wind, with Best in Show in the middle.  Anyway, we’re here to talk about Guffman, which is pretty much the funniest film you’ll ever see, assuming that you’ve done community theatre.  If you haven’t, or if you’re not familiar with this genre’s style, then you might be thrown for quite a loop.

The city of Blaine, MO is having its 150th birthday.  To celebrate, there will be a parade, a pie-eating contest, and, as a pinnacle, an original theatrical production telling the history of the small town.  In charge of this play is Corky St. Clair, late of New York city, still working to bring Broadway to those less cultured folk.  Auditions are held for the play and a lucky few get parts: Dr. Pearl the Jewish dentist, Ron & Sheila Albertson, travel agents who have never left Blaine, Libby Mae Brown, proud employee of the local Dairy Queen.  They work very hard over the course of a few short weeks to prepare a wonderful show, a production that somehow attracts the attention of an NYC producer who will be watching on opening night to see if the cast is ready for a professional gig.  The whole town is excited for Red, White, & Blaine, the biggest thing to happen since the city’s founder thought he had found California and settled in Missouri.

Corky, played by Christopher Guest, could not be more insanely & ridiculously funny, a man who buys all his imaginary wife’s clothes, lives on a diet of pigs in a blanket & cigarettes, and spends more time matching fabrics than anything else.  Some of the most memorable lines in movie history come from this film, with every scene imprinted on my brain until they become like memories.  Original music, many of the lines improvised, quirky characters around every corner; what’s not to like?  I could understand someone who was not prepared for this comedy not enjoying this film; it is a little over the top.  But if you give it a chance, let it soak in, keep an open mind, this is something that could become an all-time fav.  Why am I trying to defend Guffman?  Because I already love it, have seen it a dozen times, I just want you to join me.