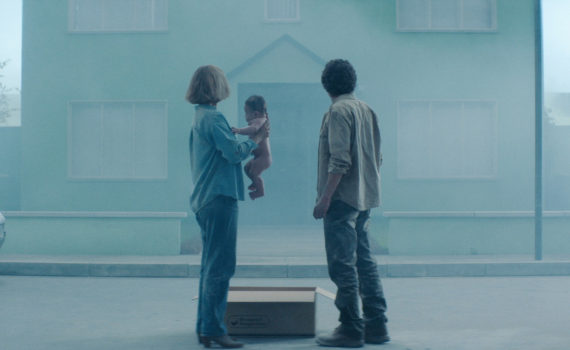 I was expecting great things from Vivarium, and I’m very disappointed that I didn’t get them.  If you’ve seen The Art of Self-Defense, you know how Poots & Eisenberg can pair in an alternate reality story, how she can be strong and he a weirdo, how they both have talent to spare, and can pull off these wacky sorts of roles.  That film is bonkers, so is this one, but I expected there to be similarities in style; what I got was something completely different and much, much weaker.  Finnegan goes down a path I wouldn’t have advised, leaving the absurd behind for the conventional, and that’s simply a mistake.

Gemma is a teacher, Tom is a gardener, they are a young couple in love, and are looking for their first house together.  Nothing seems to be the right fit, especially not the cookie-cutter development they stumble upon, but the salesman at the office is very convincing, and all three drive out to the new plot of suburbia to check out a model home.  It’s literally perfect, as is the neighborhood and the clouds, but Gemma and Tom are creeped out nonetheless, so decide to boogie.  But when they attempt to find their way out of the labyrinth of cul-de-sacs, they can’t seem to find the exit; every house looks just the same, and somehow they keep coming back to #9, the home that the salesman said he could imagine them living in forever.

This is Finnegan’s second film, his first with real names attached, and it’s obvious that he’s not quite where he needs to be yet to make the big splash that he has the potential for.  Because the story is solid from the beginning; the couple, the weird houses, how they become trapped there, how their lives become meaningless, the deeper meanings behind the facades.  There’s a lot being said about modern existence, families, marriage, having kids, making sacrifices, settling down & settling for less.  But that doesn’t last until the end, I’m sad to say, the cool, bizarre, whack-a-doo plot becomes a complete cop out toward the finale, and I was shocked with the way they decided to, in my mind at least, ruin what they had built so well.  I won’t give the reveal away, but it’s normal, it’s uninspired, it’s not left up to us to interpret, and that bothered me.  Poots is still great, Eisenberg is an undervalued talent, there’s nothing wrong with the acting, and there’s nothing wrong with a film that keeps to genre standards.  It simply wasn’t the film it seemed to be, instead turning into something like Under the Skin instead of Art of Self-Defense, which are both better movies any way.