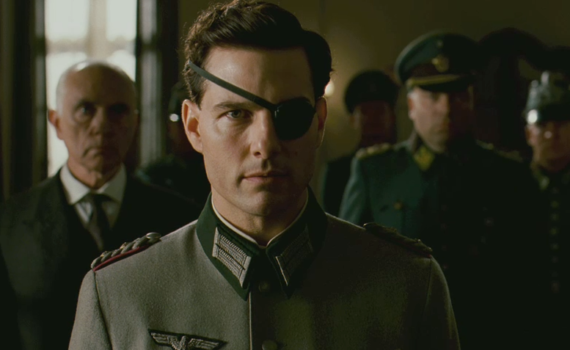 Valkyrie made a good first impression right away with how it addressed a multi-national cast playing all-German characters.  That’s not a simple situation; do you have everyone attempt a terrible accent, do you not address it and hope we don’t notice?  At the very beginning of this film, audiences get to see a transition from German to English, and from then on the dialects and the languages are covered, we don’t have to think about it again.  I’m not sure I can overstate how important that is, for us not to have to be distracted by Tom Cruise playing a Nazi, while surrounded by Englishmen and Germans alike.  Smart work by Bryan Singer, who set his movie up to succeed.  And succeed it did, without CGI or major action sequences; Singer and Cruise went back to basics to tell a fascinating tale, proving that sometimes less is more and that talent will out.

As WWII draws to a close, Germany draws in on itself.  The Allies have invaded at Normandy, their forces surge forward in Africa, the Russians deal the Axis a heavy blow in the east, and the end of this worldwide horror looks to be over in a matter of months.  Sensing this, and having never wanted Hitler’s war on Jews and civilians, many German generals create an underworld union with the goal of removing this madman from office before he commits the entire empire to the suicide mission of resisting the inevitable.  The objective; assassinate Hitler, take control of Berlin, put a new government in place, and make peace with the advancing Allies before it’s too late.  At the heart of the operation is Colonel Claus von Stauffenberg, an injured officer who has seen too much war, who only wants his family to be safe.  He will work to covertly enact Valkyrie, a red alert order that mobilizes Germany’s reserve troops, which he will then use to secure strategic points, gaining control of the country.  But first his team must murder Hitler, which has been attempted over a dozen times and failed each one, leading to the deaths of many brave men who would take down a tyrant before he destroys the world.

Some might be a little uncomfortable with the idea of watching a movie in which Nazis are good guys, but if you can view this story with an open mind I think there are a lot of ways to see the individuals involved as merely people, which, of course, is all they are.  These were just men, just soldiers, and some of them understood the evil that was being carried out in the name of honor and country and freedom.  No one is asking you to forgive their actions, this movie doesn’t make heroes where there aren’t any, but it does shed light on a curious piece of history, and that’s cool enough for me.  I like the way they handled the accents, I like Cruise as this character, and I especially like the cast they surrounded him with: Nighy, Wilkinson, Kenneth Branagh, Terence Stamp, Eddie Izzard, David Bamber, Tom Hollander.  The mood was intense without being filled with firefights and close calls; Singer stuck to the history and didn’t seem to indulge as much as a war movie starring Tom Cruise would suggest.  The entire project had restraint and finesse, while dealing with a very tricky subject, so bravo for that.