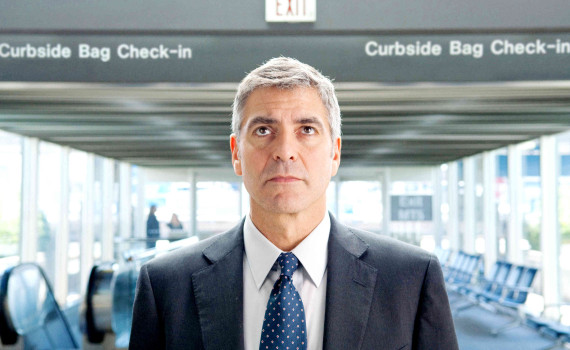 I never realized that Up in the Air had such an all-star cast.  George Clooney is, of course, a modern legend, a man’s hero & a woman’s ideal, that hunky mature guy who we all kinda want to be or have.  But although he’s the undisputed star, the actors that surround him are all top-notch.  Vera Farmiga, who took off running with thrillers & intense dramas.  Anna Kendrick, who people forget was in the Twilight series, but used this movie as a springboard for what is now super-stardom.  And then there are the periphery players: Jason Bateman, Melanie Lynskey, J.K. Simmons, Sam Elliot, Danny McBribe, Zach Galifianakis.  This is a film that brought a lot of talented actors together and helped begin a few careers.  Oh yeah, and it’s also excellent.

Ryan Bingham is a traveling man.  His job puts him on the road (or in the air, more specifically) more than 300 days out of the year, which he couldn’t be happier about.  His career is the firing of employees whose employers don’t have the nerve.  He let’s them down easy, gives them hope, and flies away to fire someone else.  He doesn’t go “home”, loves the hotel life, is fiercely loyal to his airline, and wouldn’t pick another existence.  But times are changing, and so, perhaps, must he.  A young mind named Natalie has new idea’s for Ryan’s company, the pair taking to the skies together to try them out.  And when Ryan meets a lovely fellow-traveler named Alex, these two women might just change his concept of happiness, legacy, and the point of it all.

Up in the Air is a unique movie in the way it combines many different forms into one solid construction.  The beginning is all orderly, small-packaged life, Ryan’s character, his world.  He’s humanized by Alex and taught lessons by Natalie, opening the film up to a deeper moral.  There are scenes that feel like a home movie, giving it a personal touch, and then juxtaposed against a cold airport background.  And as the events continue to unfold, the pace & feel of the story flows with is, giving us a fluid plot, which is what real life is like in the end.  So the film takes us through Ryan’s life as it becomes something he doesn’t recognize, this flux becoming the point of the story.  Clooney was perfect for this part, Farmiga was sexy & smooth, and Kendrick was the spunky upstart that you can’t help but love.  It all gets a tiny bit cheesy by the end, but at that point I was on board thanks to great acting and smooth transitions.  I missed this movie when it first came out; if you did too, don’t make the same mistake twice.