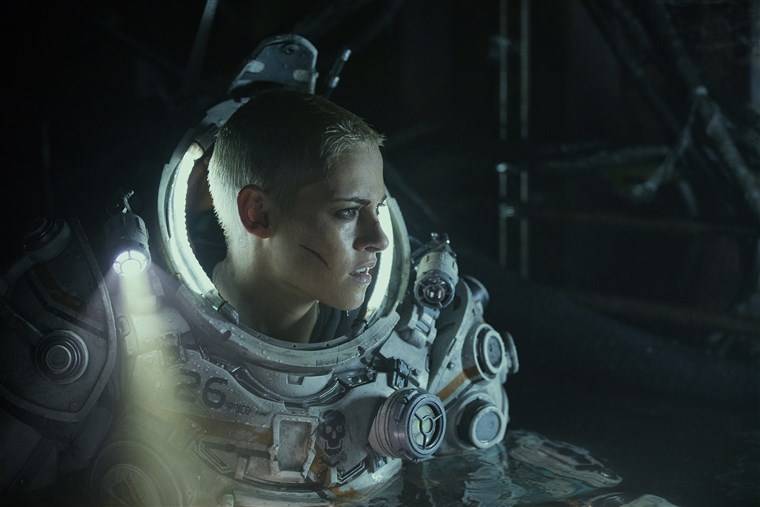 The best film of 2020 is here!  OK, lame joke, but Underwater almost deserves the chance to hold the title, for a little while at least, because it almost works so much more than we really thought it would.  Coming out in January on the heels of Oscar contenders, expectations were understandably low, but I’m here to report that this movie is no Dolittle, and that it should be taken seriously, or at least as seriously as one can take a space alien movie that neither takes place in space nor has any aliens in it.  Still, somehow this project and this story work, almost inexplicably, and credit should go where credit is due, with none of us standing in the way because we didn’t fully guess that William Eubank & Kristen Stewart could make something this good.

Seven miles deep, at the world’s creepiest mining colony, we dig down into the ocean floor for resources, while the world wonders if we’re going further than is smart.  Turns out, we are, because a catastrophe hits the drill, the mine, the base, the station, everything, and when you’re miles below the surface running to safety isn’t very easy.  Norah is a mechanical engineer and now she’s a survivor, one of the few left underwater who didn’t either get to an escape pod or die.  She soon meets up with five others and they band together to fight against their almost certain deaths: the Captain, Smith, Emily, Rodrigo, and goofy Paul.  The plan; to ride the elevator down to the ground floor, and then walk across the bottom to the drilling site, which should still have a means of escape.  Easier said than done, because the gang soon realize that some slumbering evil is hunting them, and it isn’t happy that they woke it up. So many things to talk about with this one, which is a welcome surprise; I thought I might enjoy the b-movie qualities of the film, but I never imagined I’d walk away as pleased as I was.  When I saw the trailer, I did wonder if it might be an all-or-nothing flick, like you either love or hate it, that it could either go all the way right or all the way wrong.  That’s not exactly how it turned out, there is some middle ground here, but I’d definitely lean toward Job Well Done; I had my fingers crossed that that would be the case, but I’m still pretty shocked.  Underwater is everything we enjoy about space alien movies or space station misadventure films, just in a different locale, but not really changing much.  It’s the same genre, the same feel, reaches the same milestones, but in a good way, in a way that feels comfortable and fun.  It’s semi-scary, starts with a bang, never slows for long, packs a ton into a short period of time, and can’t be called anything but pure entertainment.

It’s almost a cross between Cloverfield and Life; some shaky cam, a monstrous presence, friends traveling through danger and disaster, mixed with an evil life form, a restrictive environment, a small group setting, death around every corner.  In that manner, blending those styles, Eubank created a smart, quick, thrilling, sci-fi/action celebration that will feel familiar to fans, and should excite general audiences as well.  At times it was as fun as a video game, at times as funny as a spoof, with TJ Miller leading the comedy to what I thought was a good place and had a good balance.  Make your own choice on him, I understand some people won’t want to watch something that he’s in, I almost don’t want to laugh at his jokes, but I think his presence (as in Cloverfield) makes a big impact.  Kristen Stewart was great, minus the narration and the back story that I never cared about, Vincent Cassel was as brooding as he always is, the surprises were Henwick & Gallagher as a pair, and the entire small cast meshed well together over the course of the perilous journey, I never hated one of them and wanted them to die because they were annoying, which I think is progress. See Underwater because it’s a quality escape about a quality escape (see what I did there?), and let it be on your Best Of list for a month or so before it’s replaced by obviously better things.