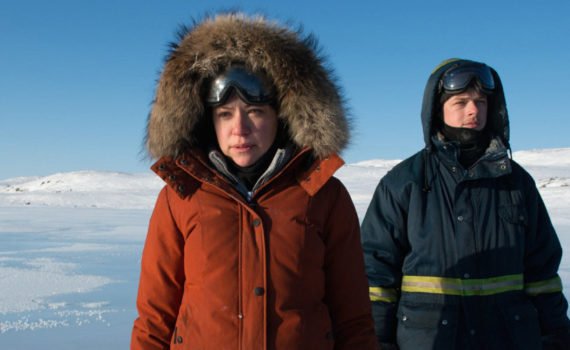 Tell Terrence Malick to watch Two Lovers and a Bear; that’s how it’s done.  Malick is the master of pointless cinema, of well-meant dramatics and existential crises that go absolutely nowhere, that leave audiences drained of the desire to live.  I, along with countless critics, want to understand, enjoy, and feel what it is he is trying to say, so we keep coming back for more, masochists who can’t escape the prison we created for ourselves.  But perhaps a director has appeared with a film to light our way to freedom.  That sounds and probably is over-dramatic, but that’s how I felt after watching Two Lovers, that someone had made a weird, subtle, sad, existential film that actually captivated me the way Malick either can’t or doesn’t care to do.

Roman & Lucy are a pair of modern star-crossed lovers living at the end of the Earth who want only to be together completely apart from the world, an impossibility that keeps them from true happiness.  Roman is a hiding from unspeakable acts down South, working hard in a place where no one in their right mind would want to live in order to escape the pain.  Lucy has demons of her own, demons that threaten her wherever shes walks, but she is convinced that leaving town, going South, making something of herself, will banish the terror for good.  Inseparable in only the way that young lovers can be, Roman & Lucy will travel through the wilderness to reach a new world, one that promises more than they can dream.

I just loved this story, and I only wanted more when it ended, the exact opposite feeling I get whenever I watch a Malick picture.  Not to beat that point, but the mood here was very resemblant, the symbolism high, and the whole thing felt like what I’ve watched done badly before.  But this time, it worked.  The chemistry between the two main characters, the simplicity of the plot, the time spent on atmosphere, the metaphors layered throughout; I was on board from the very first and never lost my keen interest.  DeHaan is quite literally the coolest dude since The Dude.  He is an amazing actor, and has been on point even more lately, so much that he’s approaching Must See status.  Life, A Cure for Wellness, soon to be in Tulip Fever and Valerian: the kid’s on fire.  His acting is reason enough, but there are numerous other reasons to see this film, from its unique creativity to its realistic delivery, not to mention some of the harshest truths you’ll ever have to face on screen.  I can’t say that Two Lovers is for everyone, but it is something special and it deserves to be noticed.