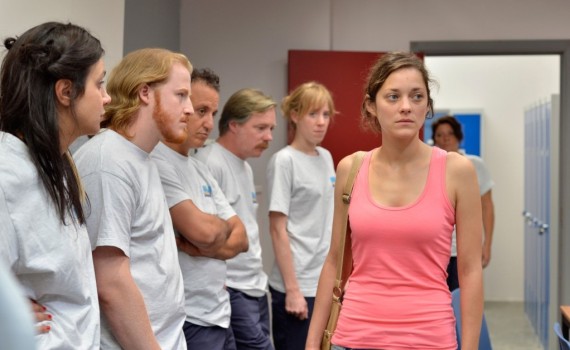 Marion Cotillard was nominated for a Best Actress Oscar for her role in this film; a well-deserved honor.  In America, we first became aware of her talent & beauty in La Vie en Rose in 2007, a docudrama about Edith Piaf, for which she actually won the Oscar for Best Actress and wowed audiences with her skill.  Hollywood roles would follow in bunches over the coming years: Public Enemies, Nine, Inception, Midnight in Paris, Contagion, The Dark Knight Rises, Blood Ties, The Immigrant, and soon she’ll be starring as Lady Macbeth alongside Michael Fassbender in Macbeth.  But amid these roles, we’ve rarely had the chance to see her use her native French or lead a French film, so immersed in American cinema has she become so very quickly.  So it was refreshing and much appreciated to be able to see her in Two Days, One Night, a simple & yet powerful Belgian film that’s a reminder of life before super-stardom.

Sandra, a married mother of two, is about to return to work after an illness forced her to take a leave.  She & her husband combine their meager salaries to provide a nice life for their children, both working hard and fearing a return to public housing.  But as Sandra prepares to return, a vote is taken in her absence by her 16 coworkers, who decide as a group that the company will let her go while the rest receive substantial bonuses.  It’s just business, as the saying goes, but for Sandra it means more than just a wage, it means a bit of her sanity as well.  Fearing a return to the problems of the past, she & her husband set out over the course of a weekend to convince her coworkers to chance their minds & their votes on Monday, to keep Sandra, to give up a large sum of money, to do the right thing, to help a friend, forcing them to reveal their true colors in the process.

It’s a deceptively simple plot, a story that takes place quickly, and a repetition of events that might sound a little boring on the surface.  Sandra goes to each of her coworkers’ homes, tells them her story, tries to get them to change their minds.  And although the same basic speech is given every time, the emotion behind the action is an ever-changing mix, as Sandra is not completely well.  We learn more & more about her absence from work, about her marriage, and about why her job is so important to her.  So the film becomes a character study, not only of the main characters, but also of each person she visits, each reacting in a unique & fascinating way.  The simple story allows the moral to speak out and the study to be completed, while also allowing Marion Cotillard to carry the movie with her amazing talent.  She’s just an incredible actress, conveys so much with every expression, and was able to captivate me in a foreign film with a basic subject, adding layer after layer of depth until I was hooked.