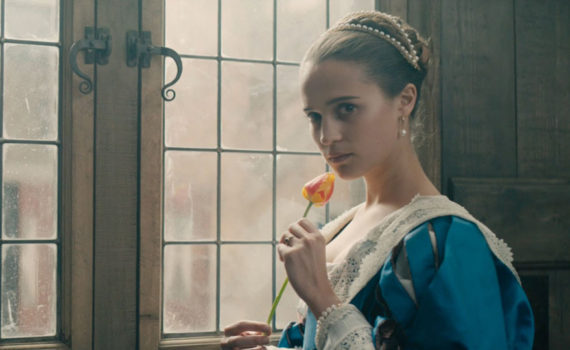 Tulip Fever ought to have been an early Oscar favorite, a film that held on through the fall and winter to become something formidable.  Its cast alone is an asset, as is the period piece model of its story and the romance swirling around its main characters.  And yet, critics blasted it as the travesty of the year, while audiences who actually saw it gave it middling marks.  Honestly, that just made me more curious, not less, and I was confident that while I might not love the film, I would at least love breaking it apart.

Love in the time of Tulip Mania in 1600s Amsterdam is as raucous as the frenzied trade of these delicate flowers.  Precious in their beauty and in their fleeting vitality, tulips are a grand metaphor for irresistible affairs; prized but short.  Sophia, an orphan who grew up in a convent, was purchased by the wealthy widower Cornelis Sandvoort with the expressed purpose of bearing him a child to carry on his name, after his first wife and his children died some years ago.  But Sofia isn’t happy, doesn’t become pregnant, and fears being sent away.  During this tumultuous time, Cornelis hires a painter, a passionate young man who falls instantly in love with Sofia.  The two begin a wild romance, schemes swirling in their heads that will aid in their escape from their current, unlivable lives.

I would say that Tulip Fever isn’t half bad, except for that’s exactly what it is; half bad.  The first hour is intoxicating, with the tulips, the history, the orphan story, the loveless marriage, and ultimately the affair.  This film is sexy to the point of distraction, with Alicia Vikander, Holliday Grainger, and Cara Delevingne all bearing much, with handsome Dutchmen gallivanting all over the place and pleasing their women.  It’s pretty steamy, which is a nice juxtaposition to the relationship between Mr. and Mrs. Sandvoort.  But after a while, something goes amiss.  It’s almost as if the director decided to copy Shakespeare in Love, but forget he actually had a good story going independently.  Things got goofy, plots swirled madly, and an entire sub-cast of actors were featured unnecessarily: Delevingne, Matthew Morrison, Zach Galifianakis, David Harewood.  Conversely, Waltz was incredible in his role, which is important because I was starting to give up on him, and Judy Dench had a solid cameo that was right up her alley.  Tulip Fever isn’t nearly as terrible as you might have heard, but it also isn’t close to the Oscar-hopeful we were imagining, instead rounding out as a clever period piece with great stars that looses its way when it should have taken us somewhere special.