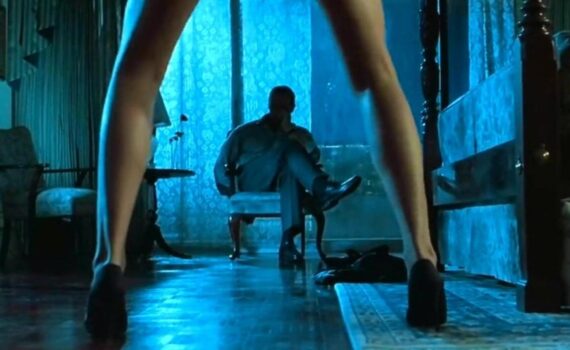 True Lies isn’t just problematic, watching it almost 30 years after its release, it’s downright riddled with bad choices and wince-worthy moments, enough to bring what I have always remembered as a fun frolic down many, many notches on the board.  Honestly, if it hadn’t been for Bill Paxton, his storyline, his character, and his acting, this might go down as the dumbest movie of all time, a real Cameron clunker that almost sunk to the bottom under its own stupid weight.

Harry seems like a normal guy on the outside; boring sales job, timid wife, rebellious teenager, blah blah and more blah.  But actually, although most of the government doesn’t even know, Harry is a world-class spy, working to keep the planet a safer place one dead bad guy at a time.  But when he suspects his wife of having an affair and attempts to trap her in the truth, real espionage gets mixed up with fake missions, until both Harry and the lovely Helen are both in over their heads.

For real, Bill Paxton is genius in his scenes, and that storyline, the fake spy stuff, where Harry sets up the supposedly cheating couple, is pretty awesome.  Jamie Lee does well, she’s so sexy & funny, there are moments that really work …and then the rest of the movie gets in the way.  Arnold is just not a good actor, he’s terrible really, and Tom Arnold is about as likable as invasive surgery.  Their acting sucked, the action is ridiculous, and without the Paxton part (and the iconic Curtis hotel scene), the film would have been a complete, racist, sexist, juvenile disaster.