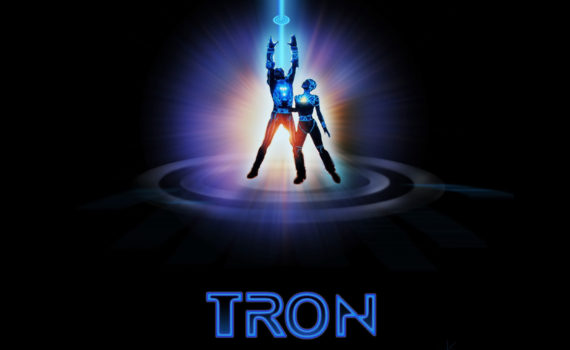 No movie is more 1982 than TRON.  From the feathered haircuts to the use of then-cutting edge graphics, this sci-fi classic screams 80s, and for that reason will never die.  It sparked a sequel that would be released twenty-eight years later, an animated TV show starring the voices of Elijah Wood & Paul Reubens, and a potential third film that hasn’t quite got off the ground yet.  Point being, as dated as this film may be, TRON has a lasting impact and a reputation that it does deserve.  That doesn’t mean that it’s a perfect blend of sci-fi & action, that it’s Star Wars reborn, or that it wouldn’t be best to leave it in the past where it belongs.  But there’s still much to enjoy here, especially for those who grew up with it, though I doubt there’s room for adding in a bigger audience now.

Kevin Flynn, a discredited computer programmer and now local arcade owner, has never gotten over the fact that Ed Dillinger stole his ideas, claimed all of ENCOM’s success as his own, and is now the power behind the throne of the nation’s largest digital media corporation.  So Flynn breaks into Dillinger’s impermeable system with the help of his friend Alan Bradley’s TRON watchdog program, in the hopes of exposing the crook.  But the computer world, the Grid, is now being run by Master Control, a program that can bring human users into the digital realm and force them to live the life of a computer.  So Flynn must now fight from the inside, where Tron is a friend, where games actually kill, and where nothing goes as planned.

I hate to say anything negative about a movie I loved as a kid, but TRON doesn’t exactly hold up to scrutiny.  The technology will, of course, look a little silly & unimpressive to our eyes now, when at the time it was pretty kick ass.  And the acting isn’t wonderful, the lines cheesy, typical 80s stuff.  But there’s still just enough to hold onto to make TRON a fun revisit, if not a great first-time watch for those who missed it.  The concept is there, and the story written well enough to get by.  Had anyone else other than Jeff Bridges been cast as the lead I think the whole thing may have failed, but his talent alone was a rock for the whole project to rest on.  The film is still cool, still fun, still unique for its time, I just can’t recommend pretending that it’s a yearly-watch classic.