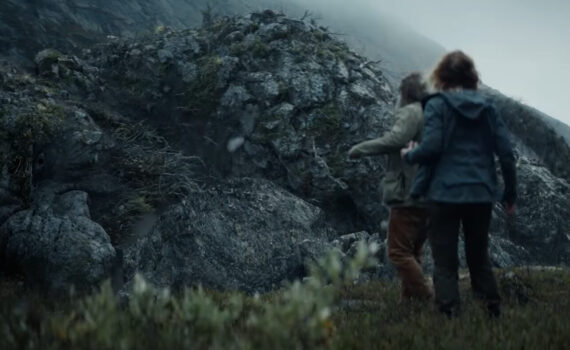 I can’t recall such an unintentional 180º pulled by a film halfway through its story, one that was going well, all things considered.  And Roar Uthaug is no amateur, he did Alicia Vikander’s Tomb Raider and Kristoffer Joner’s Wave, both of which were decent.  But Troll is another beast entirely; actually, two beasts, since its first half is so fun and its second is so disastrous.  Rarely has a movie shocked me with its awful turnaround; this one will go down in the books.

During a tunnel-building explosion under a mountain in Norway, with protestors chanting for nature to be preserved outside, something is awakening from a deep slumber deep underground, and it isn’t happy.  It’s a creature of some sort, a blend of fantasy and reality, but what it wants remains a mystery.  A paleontologist named Nora, a political advisor named Andreas, a soldier named Kris, and a crazy old coot named Tobias join forces to figure out the puzzle and to prevent the creature from destroying Oslo.

At first, I was happy.  There was a cool creature, a fable, some science mixed with fiction, nice characters, I was enjoying the ride, and all was well in Norway.  This isn’t a bad idea, wasn’t badly done, and could have worked …had it not jumped the rails about halfway through.  When the switch came it came hard, with people making ludicrous logical jumps, the writing taking a major nosedive, stolen plot points in all directions, and then a climax that will have you laughing, and not it a good way.  Really, the ending was criminal, just so stupid and so meaningless, like with about 45 minutes left in the film everyone decided it just needed to be wrapped up as soon as possible with no thought given to anything that had happened so far.  A complete stumble, and a disappointing one at that, Troll is a movie you can miss.