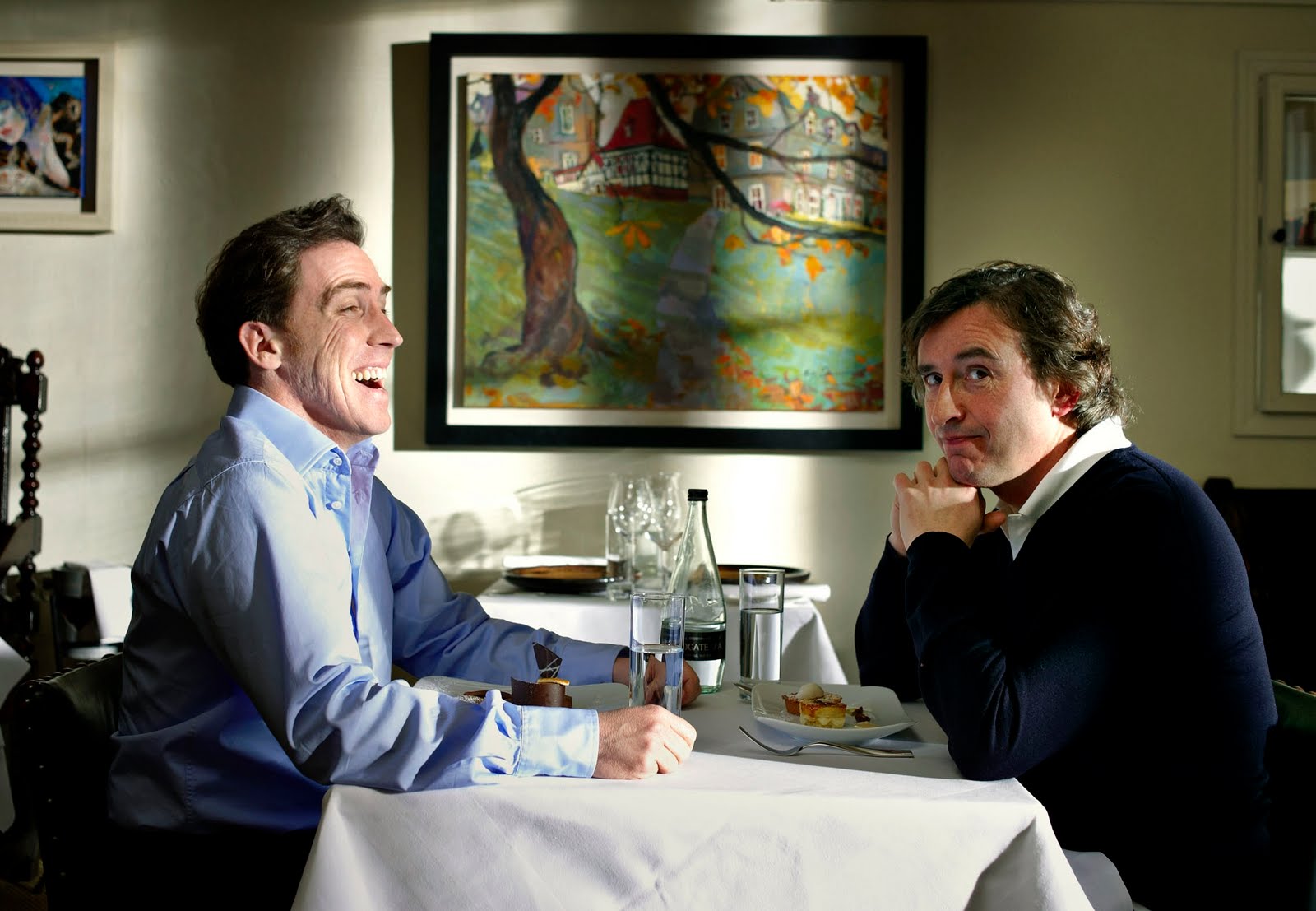 They can’t possibly be for everybody, but improv films are definitely in style.  Filmmakers are enjoying the freedom that comes with losing the script and just relying on the actors to carve out lines & characters on the spot.  And audiences are appreciating the natural feel of these movies, the way the dialogue loses the forced quality of so many others, the believability of the plot.  I’ve seen some improv dramas (Happy Christmas), some improv sci-fi (Coherence), and now some improv comedy (The Trip).  Although, you can’t call this film strictly improv, because its actors play themselves.  Steve Coogan is Steve Coogan, Rob Brydon is Rob Brydon, and they went to restaurants in England with an idea of what they wanted to talk about, talked about it, and made it into a movie.  Sounds pretty simple, and although there is a constructed plot to keep the action all tied together, it is a fairly uncomplicated set up, leading to a movie that’s basically just two funny guys hanging out, but in the best way possible.

Steve, a well-known British comedian, has been asked by a media outlet to take a tour of some north country restaurants.  He would have taken his girlfriend along with him, but she’s moved back to America to work in the magazine business, forcing a break that might just be a breakup.  So Steve asks Rob along.  Rob is also an actor, a comedian, an impressionist, somewhat of a rival, somewhat of a friend, an unflappable optimist who honestly doesn’t know how annoying he is.  So Steve & Rob set out on the road together, eating some fine food, visiting historic sites, staying in nice hotels, seeing the beautiful countryside.  But it isn’t all perfect.  The pair compete more often than they get along, interrupting each other to see who can do the best Michale Caine, frustrating each other with their respective singing of ABBA songs.  And while Rob is happy with the simple family he has back home, Steve is lonely & depressed, jumping from one women to the next without finding true contentment.  Will the duo survive their trip together, or drive each other mad along the way?

So, some introduction first.  I’m no expert on British television, and obviously Steve Coogan & Rob Brydon aren’t huge celebrities in the States, but you might have seen a few Coogan films.  Hamlet 2, Tropic Thunder, The Look of Love, Alan Partridge, Philomena; a few you may have come across, especially the last.  Brydon is more of a TV and voice over guy, a very talented impressionist and comedic character.  This film was made to showcase their talent, their humor, and their relationship.  Director Michael Winterbottom had a plot in mind, took the guys around England to produce a few comedic ideas, and then repeated the trip with a camera, capturing some improv and some original comedy along the way.  It’s a hilarious movie, that is if you enjoy Sean Connery impressions, two regular guys forced to eat fancy food, and, in general, cheeky English humor.  From start to finish it’s a dry, sometimes uncomfortable, often witty showcase of these two men, actors who know their own weaknesses, as well as those of their partner.  At times the insults begin to feel real, but this just adds to the genuine emotion behind the film, the actual humor in the lines, and the feeling that you’re watching something incredibly original.  Credit Winterbottom for the concept, credit Coogan & Brydon for the comedy, and enjoy The Trip, a refreshingly simple, realistic, and understated film that is full of organic laughter.