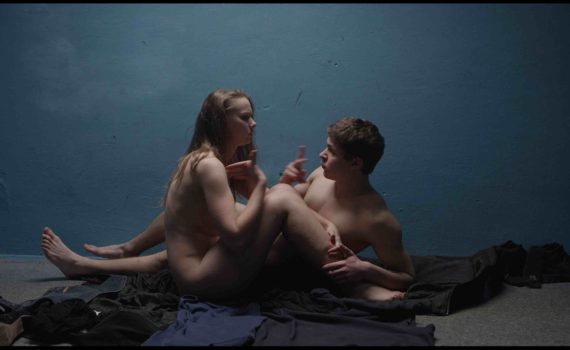 During the 2015 award season, The Tribe was a major player both as a foreign language film and as an audacious standalone piece of cinema.  This Ukrainian film features a cast of mostly first-timers, all of whom are fluent in sign language.  In fact, and here’s both the hook & crux of this movie, there is no dialogue spoken throughout the entire story.  No subtitles, no explanations, no interpretations, just sign language and the ability of the actors to convey the plot through their actions.  As critics, we often say “tell me less, show me more” and this film did exactly that, refusing to tell us a thing, forcing us to see everything for ourselves, whether we wanted to or not.

Sergei newly arrives at a boarding school in Ukraine, a school specifically designed for deaf & mute students.  Its rough appearance is apparent from the start, and the more he delves into his new home the rougher he finds it.  A gang of older boys run the school like a prison, commissioning goods, forcing servitude, and controlling the weak, a gang that Sergei is brought into right away, without much choice.  He soon finds himself part of the day to day misery of the delinquent group; robbing, assaulting, drinking, and dominating out of what quickly becomes habit.  But when he falls in love with Anya, a girl he helps prostitute, his loyalty to the tribe will be threatened, as will his life.

I’ve never seen anything quite like this and I doubt I ever will again.  A film without sounds or words, The Tribe is a whole new way to look at the world, albeit a very bleak one.  And not just because of the lack of stimulation and conversation, but also because of the world in which we watched the characters live, a stark, cold, desolate, frightening place that seemed to breed chaos & crime, with no room left for compassion or emotion.  Over two hours of silence did not make for an easy watch, nor did the casual violence, aggressive sexualization, or general depression of the plot.  But this film is something unique, that above all else, with a simple story to tell that only needs to be seen to be understood.