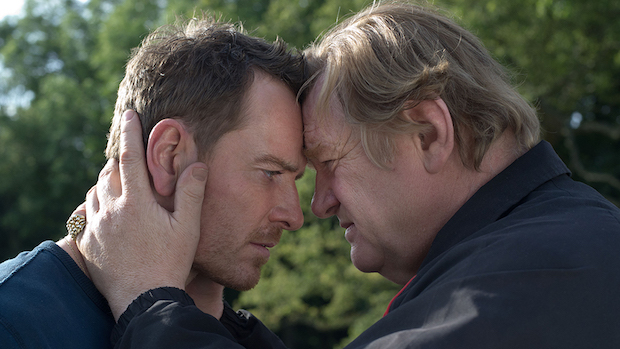 If ever the term ‘uneven’ was to apply to a film, Trespass Against Us would be the ideal candidate.  It boasts one of the hottest stars in the world right now in Michael Fassbender, a ultra-talented actor who can literally do no wrong.  His range and his natural demeanor are assets that he wields like axes, chopping apart conceptions and expectations with a razor-sharp edge.  I’m guilty, I love the guy, and I’d watch him in anything right now, especially with the veteran Brendan Gleeson on hand, someone I’ve respected since I saw him in Braveheart as a kid.  These two guys together, a cool fringe-British plot, some awesome accents; the only thing that could derail this success in the making was the director, whose amateur status reared its ugly head in a major way and ultimately led to the film’s bumpy, clunky, downright wrongheaded cinematic path.

Living in caravans, stealing to stay alive, bucking society at every turn, and holding together as a family no matter what, a group of Brits who want nothing to do with the outside world (except for thieving its valuables) cling to a questionable existence on the lonely fields outside Gloucestershire.  Colby Cutler is the pater familias, lording over the group and setting up the robberies, telling everyone where and when to go.  His grown boy, Chad, has a family of his own, including hero-worshiping son Tyson, and has begun to tire of the rebel life.  He wants to take his family to town, leave the squalor behind, start anew, but Colby will never see that happen.  The two fathers will go to war to hold on to what they love, no matter the cost.

Fassbender is incredible, I’ll just put that out there, and Gleeson isn’t far behind, that’s not the problem with this movie.  The acting is great, the accents are amazing, the scenery is authentic, and the idea behind the story is solid.  The director borrows heavily from Snatch, giving us a Pikey mood, complete with coursing and dogs, but that didn’t bother me much.  What stopped me from loving the film was the complete misuse of emotion and balance.  Shakespeare juxtaposed comedy and tragedy, that still works to this day, but Adam Smith used levity and drama unwisely, creating a pace and feel that was a complete roller coaster.  The funny moments seemed out of place, the heavy ones too heavy, and nothing worked exactly the way it was obvious it was supposed to.  And that’s sad, because there are positives here, I won’t warn you away from this film, I only wish it had fallen into more-capable hands.