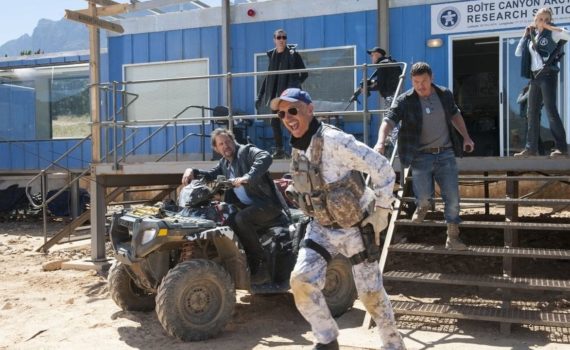 DMP is a director who likes doing remakes, which is an obvious red flag, or, more specifically, an indicator that he’s a no-talent ass clown.  That’s a movie reference more than a direct insult, I don’t know the guy, but his filmography speaks for itself, and what it’s saying ain’t pretty.  It’s no surprise that Tremors: A Cold Day in Hell in complete garbage, as are the others in a franchise that started out so strong, but marched forward with lackluster cash grabs that aren’t even worth our notice.  Well, I noticed this “film”, thought it might be halfway fun, but boy was I wrong; it’s about as fun as a drill bit to the ear canal.

Graboids have resurfaced, literally, but this time it’s way up north, where supposedly it’s too cold for them to live.  But living they sure are, and killing they will soon be, unless someone can put a stop to this newest infestation.  Who ya gonna call when you need to destroy a batch of giant underground death grubs?  Burt Gummer, that’s who; he brought the firepower the first time around and he’s been fighting evil worms ever since, so he’s the man for the job.  Burt and his son Travis head to the Canadian Arctic to stop the Graboids from making a buffet out of a research center, and good luck to all in not getting swallowed whole.

It’s bad, it’s really bad, it’s “I feel myself dying by the second” bad.  The first is iconic, the rest have been ridiculous, and I’m not sure why I decided to check in on this latest other than perhaps a masochistic tendency to watch b-level creature features, but boy did I get more than I bargained for.  It is Jamie Kennedy after all, the worst actor in the history of anything, so that’s no surprise, but I think the lack of literally anything resembling entertainment was.  A Cold Day in Hell is so utterly awful you can’t believe your eyes, but it just keeps happening, and eventually you realize that you really are dead and haven’t gone to heaven.  The abysmal acting, the insane plot, the static locale, the “action”; it’s gross on so many levels, and that’s no pun on the lead actor’s name, that’s just the best word to describe this disgusting situation.