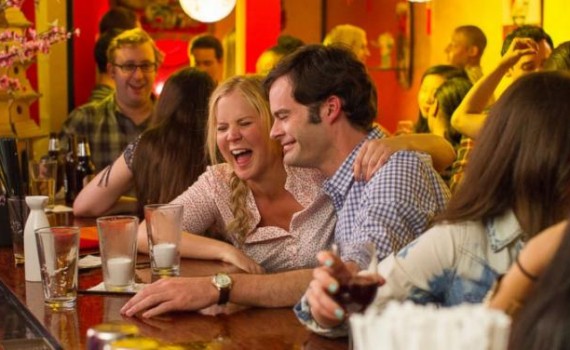 I can remember Amy Schumer from Last Comic Standing in 2007, a show she didn’t even win.  The redhead guy from the Dodge Hemi commercials won that year, Amy finishing in 4th place, though the highest placing woman.  She was funny then, she’s funny now, and her brand of comedy is too important to be denied.  Her acts are based on the male dominated society that we accept so easily and our inherent dislike for females who say & do the exact same things.  If you’ve seen her on Ellen, or live at the Apollo, you know she makes sex jokes, gender jokes, but delivers them in a hilariously uncomfortable way that forces us to question why men talking about their penises seems normal, while women talking about their vaginas seems weird.  Amy is here to stay, with a TV show, appearances all over, and a hit movie that will make you both laugh & reframe.

Amy is a trainwreck, hence the title, a young woman who has nothing together.  She sleeps around, gets drunk every night, has very little self-respect, and treats those around her with a comedic disdain that hides her true feelings.  She works for a smutty magazine that caters to guys being gross guys, and her latest assignment is a sports surgeon who operates on famous athletes.  Little does Amy expect that she’ll fall for this guy, Aaron, finally meeting someone who she actually wants to spend time with and let into her world.  But her emotional hangups, her dysfunctional family, and her inability to love will all stand in the way of her happiness, leading to a relationship that, if left to its own devices, is destined to fail.

The brilliance of Trainwreck is that it turns the stereotypes around.  It’s a romantic comedy at its core, but with a woman taking the man’s place and her love interest being the nicest guy you could ever meet.  Schumer shows us that the story can work the other way around, and asks us why we don’t see it more often, making the broad point that gender doesn’t mean as much as we think it does.  The plot feels very personal, as Schumer wrote the film herself, and she was smart to get veteran comedy director Judd Apatow on board to make sure everything went smoothly.  And it really did.  Bill Hader as Aaron was excellent, very lovable & very real.  LeBron James steals the show as himself & Aaron’s best friend, actually creating a wonderfully funny character.  And a few of the side actors were standouts as well: Tilda Swinton, Colin Quinn, John Cena, Randall Park, Ezra Miller, Brie Larson.  The best part of the movie might have been the little boy Allister, the epitome of the “nice” world that Amy despised but actually desired.  And a fake movie starring Daniel Radcliffe & Marisa Tomei was the cherry on top, completing what was a fun, irreverent, slap in the face by one of America’s current comedic powerhouses.