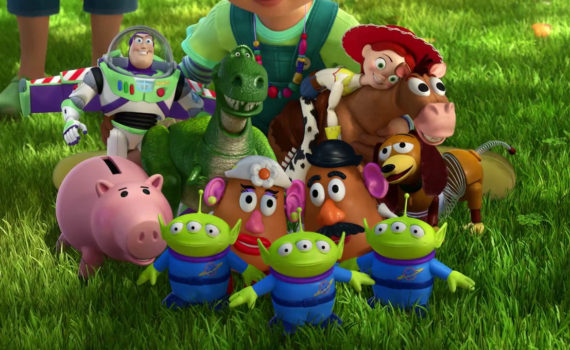 I didn’t love Toy Story 3 the first time I saw it; parents were bawling their eyes out, and I just didn’t get it.  I rated it down around the middle with Toy Story 2, though a step above, since it was obviously better than the weakest the franchise had to offer, but not nearly as good as the original.  Well, that was 10 year ago; I was a little-kid parent, not a growing-up-kid parent, and apparently that makes all the difference.  I don’t know how those who don’t have children approaching teen years or college years could love this film, since that’s the audience it’s speaking to, but I can say now that I understand and will adjust my rating: Toy Story 3 has a message that I finally hear, and I’m glad I gave it that extra chance.

Andy is getting older, and doesn’t need his toys like he used to.  He still loves them, but from now on he’s gonna love them while they’re in the attic; does this mean that they’re still Andy’s pals, does he still need them, should they wait for him, or will he soon forget?  He isn’t abandoning Woody, no, Woody is his favorite, Woody is going to collage, and so the other toys make a decision; they hop into a donation box headed for the local daycare, thinking that they’ll get played with a ton at a daycare, what could go wrong at a daycare?  It turns out, a lot, and they probably should have stayed in Andy’s attic.  The head toy at Sunnyside is Lotso, an angry bear who doesn’t believe in loyalty to an owner.  He sends all the new toys into the little kids room where they are played with too roughly, while he and his crew live the sweet life in the older kids room.  Woody better come back and save his friends from this prison, before they are pulled apart one plastic piece at a time, or before they forget just how good it feels to have a child who loves you.

I had adults telling me to prepare myself before seeing this movie; they were floored by the heart of the message, and just assumed everyone would feel the same.  Well, at the time I had a young daughter, a son would soon be on the way, but I wasn’t picturing kids going off to college; that’s simply not where I was.  Now that I’m closer, I think I understand, I just wish that huge, emotional feel moment had come with a little more support, because the film as a whole is only good, not great.  Now that I get it, I get the hype, and I liked watching this second time accordingly.  The animation was so much better in #3, the new character spotlights (Ken & Barbie, mainly) were so fun, and I did fall into the Bonnie/Andy tearjerker trap, so I can’t say I didn’t appreciate what I watched.  Still, this installment isn’t as good as the first, nor would it be as good as the last, two films that really step it up in quality and deeper meaning.  Toy Story 3 stills deserves a bit of my apology; I’ll just never love it the way some people do.