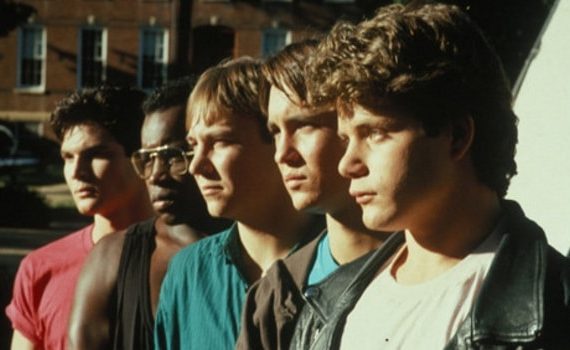 Toy Soldiers is a lot more adult than I remember it being, and I probably shouldn’t have watched it when I was 8, 9, 10, whatever I was; my parents may have been asleep at the wheel.  Honestly, I saw a lot of films when I was young that I shouldn’t have, I think I had a thirst for cinema that trumped any parental restrictions, and, yeah, times were different then as well, there’s that.  But I think this simply made me love movies, and eventually made me into a film critic; what’s a little scarring, anyway?  So at least Toy Soldiers has the distinction of being a cool, boundary-pushing personal experience for me, because it doesn’t have much else going for it, other than some cool teenage action; it’s really not that good from any other angle.

In Columbia, a drug lord’s son leads a hostage takeover in order to get his father out of prison, which doesn’t go very well.  So he sets his sights on the US, where, at a prep school, the son of a judge attends classes and goes through puberty, not knowing that his & his family’s lives are in real danger.  Well, even with that kid eventually moved to protective custody, the drug heir, Luis Cali, takes over the school, demanding his father’s release.  But this is no ordinary boarding school, these kids are rich but mischievous, and they quickly form a plan to defeat the bad guys themselves; they don’t trust authority, can’t stand being told what to do, and would rather kick some ass on the inside than wait to be rescued by adults.

Yeah, I watched this movie too early.  They talk about masturbating, have phone sex, say fuck a lot, people get dropped out of windows to splat below, guys are blown away, heads get holes shot through them; I have no problem with any of these things, bring the sex & sadism on, but man, I probably shouldn’t have seen this when I was 9.  But wow did I enjoy this film then, and I assume a lot of it passed over my head, and I still remember it fondly, AND I became a film critic, so hey.  Looking at the film itself, it’s pretty silly, Red Dawn meets Taps meets Breakfast Club meets Goonies meets Dead Poets Society, a real all-over-the-place experience that’s too far-fetched to accept.  But the cast is fun (Astin, Wheaton, Gossett Jr, Keith Coogan, R. Lee Ermey, Denholm Elliott, Jerry Orbach), the pace is nice, Sean Astin was (very briefly) a bad ass, and was one of my (temporary) heroes, so that’s cool, and Toy Soldiers remains a weird little time capsule that I still enjoy, even though I know it’s pretty bad.