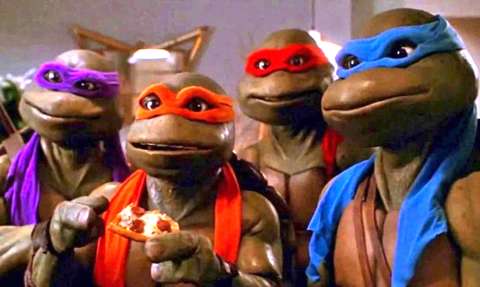 A blast from the totally tubular past, Teenage Mutant Ninja Turtles was all the rage when I was a kid, from this film to the TV show to the video games to the toys; Turtles were everywhere.  It was the biggest thing since G.I. Joe, and we were hooked, we were all in.  This film is an example of the kind of humor and slapstick combat we enjoyed at the time, and showing it to my son was a great, great pleasure.  That doesn’t mean this movie is any good, obviously, but nostalgia is a very powerful thing, and can be very fun to hold on to.

Deep in the sewers under New York City dwell four very odd brothers, along with a father figure who is not so normal himself.  They are the Teenage Mutant Ninja Turtles, four little guys who grew into muscular roundhouse machines, thanks to a canister of ooze that affected their growth and the growth of a wise rat who took charge of them, trained them, and loved them all.  Donnie, Leo, Raph, Mikey; they are the young heroes that the city needs, especially when an evil blast from the past creates a crime ring that threatens to destroy the city.

The boys, Splinter, April, Casey; wow these guys were cool.  They were a mismatched band of knuckleheads who you just couldn’t help but love, and that’s the joy of this film; you love it despite its problems, at least if you watch it for the first time when you are between the ages of 8-12.  Weird stunts, weirder humor, the weirdest setup ever; how was this franchise even popular?  But it was, and I loved it, and I’m happy to re-watch it with that joy in mind.  Now, it’s crap, don’t get me wrong, complete crap, but so entertaining, and that’s just the way this wacky world works.