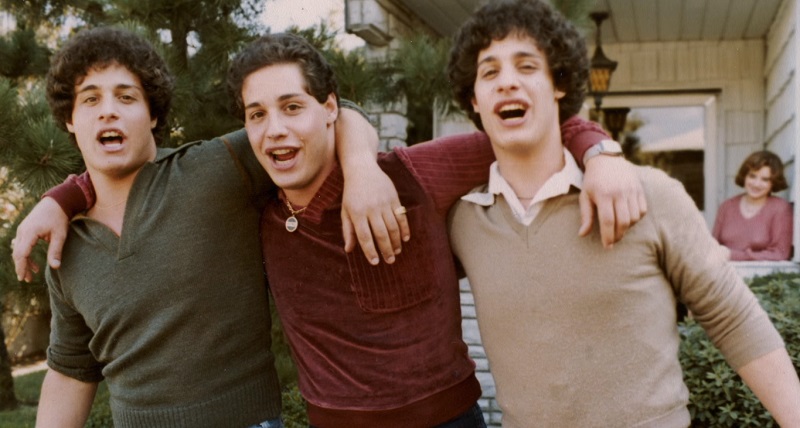 This year’s Best Documentary Feature category might be completely dominated by Won’t You Be My Neighbor, but in a close second should be Three Identical Strangers, the shocking true story that’s too wild to be fiction. It’s a revelation of a life-altering secret, one that affected countless people and shook families apart, and the secret itself is only the beginning of the story. Behind it all is a debate about the very nature of humanity, of what makes us tick, of how we come into ourselves when the weight of the world is on our shoulders.

When Robert went to college as a freshman, he was confused when other students seemed to recognize him, to assume he was some guy named Eddy, who he had never met before in his life. It turns out that not only were Robert and Eddy twin brothers separated at birth, but there was a third brother as well, David, the three young men growing up with miles of each other, never knowing that they were triplets given up for adoption and moved into different households at 6 months old. But that’s not the shocking thing, that’s only the beginning. The rest is a scandal of epic proportions, an evil manipulation that has to be witnessed to be believed.

Three Identical Strangers is one of the smoothest documentaries I have ever seen, a start-to-finish story that cares little for frills and focuses perfectly on the plot, a story that’s so wild it will shock you to your core. I don’t mean to be dramatic, but I said “oh wow” out loud more than once, and what you learn was done to these young men when they were babies, not to mention the countless others that have been discovered since defies belief. Not only that, but the moral messages brought to the surface by this movie and the debates sparked by its content will have you pondering and questioning for days after. It’s not every film that can affect an audience so greatly, and we need to take notice of one that is of high enough quality to make this large an impact.