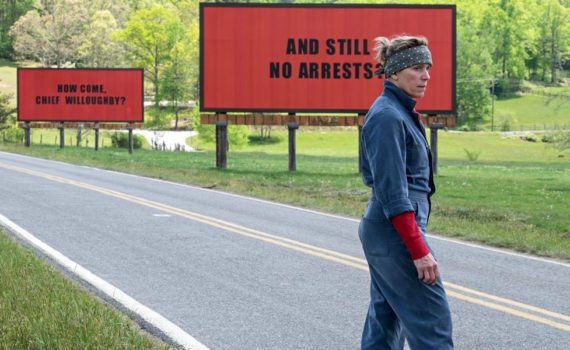 Three Billboards is an early Oscar favorite, and I’m not really sure why.  It does boast a solid cast and a darkly entertaining, off-beat plot, so perhaps critics were primed to like it.  Audiences don’t seem to be on board, or just not watching, since the ratings numbers are quite low, even though the ratings themselves seen to be across-the-board high.  I guess everyone is due one film a year that the majority love and you just can’t fathom the praise, and Three Billboards must be mine, because as much as I wanted to enjoy it, I simply didn’t.  McDormand is great, the story is as wacky as it is frustrating, but I just kept ticking off negatives as I watched, without noticing enough positives to offset my dislike.

When Mildred Hayes’ daughter is killed, her world understandably crumbles, and she desires justice over all things.  But the police can’t find the killer, and months pass without an arrest being made, a fact that Mildred won’t accept.  So she does something about it, something rash, something bound to piss off the entire populace of her small town, specifically its law enforcement.  She rents three billboards, puts a bold message across the group, and waits for a response.  Well, a response is swift, as Police Chief Willoughby himself is named on the billboards, a man both the townsfolk and his fellow officers adore.  He is at a loss for how to solve the case, how to console this grieving mother, and how to do his job while dealing with a personal tragedy that makes things all the more complicated.

First the positives, because I’m not here to tear this film to shreds, I just don’t think it works in the ways that others think it does, and I don’t know why it’s still an Oscar frontrunner.  McDormand was great as the distraught mother, because she focused that pain and crafted it into sharp anger, something that I think happens often in a situation like this.  You move on, you crumple, or you get mad, and this character gets mad, something I appreciated seeing on screen.  Rockwell was probably even better, tremendous even, and could potentially see a Best Supporting nomination.  Also, something that really struck me as important was the way each character in the film was both good and bad, right and wrong, flawed but trying.  That felt very honest, that heroes aren’t obvious and villains don’t wear signs.

But that’s about it; what I didn’t like outweighed what I did.  Other than McDormand, the roles were more like cameos, which made no sense to me.  Woody Harrelson, Caleb Landry Jones, Kerry Condon, Abbie Cornish, Lucas Hedges, Peter Dinklage, John Hawkes; I wanted someone to step up and show me some raw acting talent, but ever character was written as a side piece, making it impossible to make an impact on the outcome of the film.  When they did have a chance to speak up, the dialogue was awful, with a flippant use of emotion and no rhythm to the conversations whatsoever.  And this might sound odd, because I’m no prig, but they cussed too much.  Or, perhaps more accurately, they cussed too wrong, overusing and unnaturally using words like ‘cunt’ until it felt like they thought you’d think it was cool.  But it wasn’t, nothing about the style the film was done in was cool, or even respectable, and I’m not sure what director Martin McDonahg, who doesn’t have a ton of experience, was thinking.