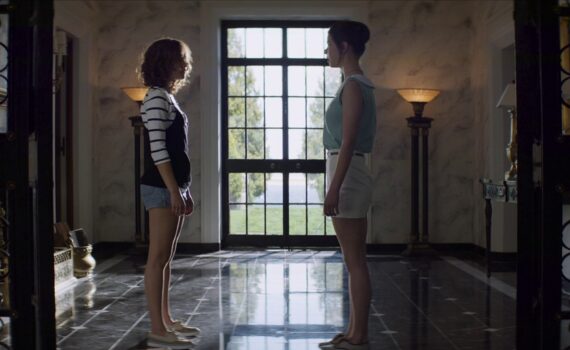 I thought I was filling in a blind spot when I went back to watch Thoroughbreds, a blind spot that was potentially a phenomenal film, based on what I’d heard; I didn’t want to miss that.  But what I had missed instead was an awfully amateur, badly bloated film school project, one that I personally would not have given an A.  Thoroughbreds is only supposed boundary pushes, not real ones, and that can be felt in every thread of the weaving.  It’s a first attempt, not a final draft, and that’s a big disappointment.

The details are sketchy, but Amanda and Lily were once friends, they aren’t any more, and Amanda has recently been through hell; her father died, she killed her own horse, she’s been away from school, and she’s in pretty big trouble.  Lily’s life isn’t perfect either; her wealthy new dad hates her, her mother is a trophy wife pushover, and she’s in trouble at her boarding school.  The two reconnect and try to reforge a friendship, with one odd goal at the center of their conversations; killing Lily’s evil stepfather and getting away with the crime.

Cooke & Taylor-Joy are both accomplished actresses, and they work well together here, as far as talent goes, but the film itself gives them hardly anything to work with.  Amanda supposedly has no emotions, Lily is keeping hers hidden, that’s a weird way to get to know the two main characters, and, I don’t know, if Anton Yelchin hadn’t come along for a bit I might have given up trying to understand the emotional roller coaster this movie became.  It was also hard to follow, either because its info was pieced together or because it was deadly dull or both.  Not a film to hang your hat on, Thoroughbreds is Finley’s first, so maybe it gets better from here, but this film is very far from the solid cinema it’s touted to be.