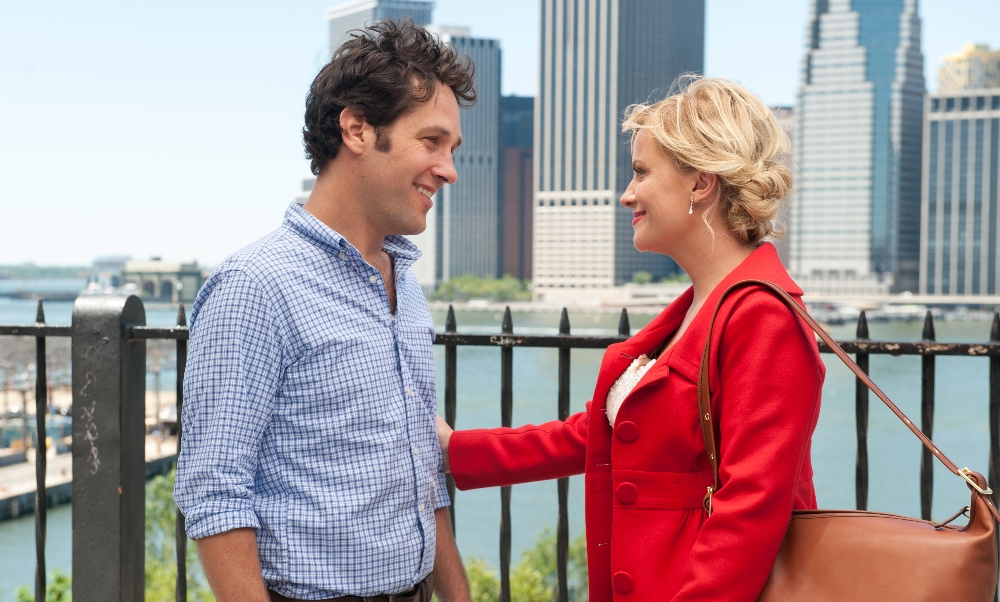 Romantic comedies are to cinema as talk shows are to television.  We know they’re stupid, we know they’re fake, we know the star personalities are only there because they don’t have the talent to do anything better.  And yet we watch them anyway.  Don’t say you don’t, because, even if you’re like me and would claim rom/coms as your least favorite genre, you’ve still seen your fair share.  And enjoyed it.  Let’s be honest, sometimes they just tug at our hearts, even though we don’t want them to.  That’s why Hollywood keeps pumping them out; they make money.  So here’s an anti-rom/com, a spoof of the category, a farce that makes fun of the idiocy that is the American love story.  But here’s the problem; every one of us likes at least one romantic comedy, and most likely it’s going to be made fun of in They Came Together.  That’s one reason not to watch this movie, and, oh yeah, there are a couple more.

Joel & Molly fell in love in New York City over the changing of a few seasons, enemies at first, but ultimately soul mates.  Sound familiar?  The couple call their own relationship a typical American movie plot, and it of course is, a story of love, fights, silly mishaps, and redemption, all set against the backdrop of a bustling city.  Molly owned a quaint little non-profit candy shop, had just gotten out of a serious relationship, and was looking for a fresh start.  Joel worked at a giant candy conglomerate, had a controlling girlfriend who was out of his league, and wasn’t actually very happy.  When the two sassy New Yorkers met at a holiday party thrown by their friends in the hope that they would hit it off, sparks flew, but not the good kind.  They didn’t like each other at first, can you believe it?  But they would soon fall in love, with a little help from fate, destiny, chance, cupid, and a bit of hard work.

There are a variety of reasons that I didn’t like this movie.  It wasn’t the actors, that’s for sure.  Paul Rudd was as cute & funny as always, Amy Poehler was silly & likeable, and the side characters all played their parts well; Bill Hader, Christopher Meloni, Ellie Kemper, Cobie Smulders, Melanie Lynskey, Michael Ian Black, and especially Ed Helms & Michael Shannon.  The cast wasn’t the problem, nor was it their chemistry.  It was everything else.  The movie was as over-the-top as a Not Another movie when a simple cutting critique would have done better.  It was too obvious, too in-your-face, when the characters could have just been their spoofy selves without having to explain why they were funny.  And with diarrhea jokes, Groucho masks, and weird sex, the humor was incredibly & surprisingly juvenile.  But what turned me off the most was that the film poked fun at When Harry Met Sally the most, a film that, sorrynotsorry, is phenomenal.  Don’t mock maybe the only heartfelt rom/com ever made, don’t pander to audiences by spelling out your jokes, don’t act like forty-year-old teenagers, and please, above all, don’t make another one of these movies.