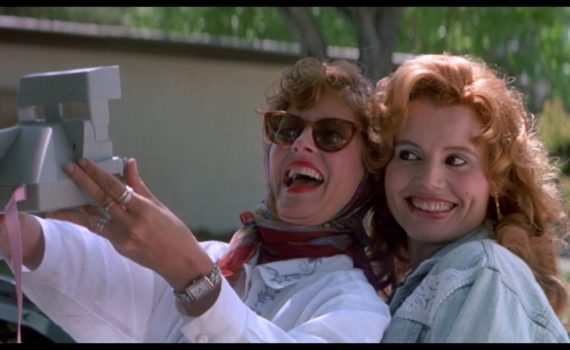 I didn’t watch Thelma & Louise when it came out; I was 7.  And I didn’t watch it in the 90s; it never spoke to me.  But I decided that I needed to fill that gap in my Watched List because it’s something of a classic, and hey it was on Prime.  Perhaps there was a window that I missed somewhere, perhaps a time when I would have enjoyed this movie, perhaps when it didn’t feel so dated.  But I’m not sure that magic moment would have been enough, would have aligned enough to make me ignore the glaring fact that it simply isn’t any good.  From the acting to the directing, and punctuated by seemingly every choice in between, Thelma & Louise is an awful film; it’s shocking that more people don’t think so.

Best friends from Arkansas, Louise and Thelma are two peas in a pod, and are both in desperate need of a vacation away from their every day lives, their romantic troubles, & the dull despair of mundane country existence.  They head out on the road for a mini-vacation, but run into trouble right away when happy-go-lucky Thelma is attacked, and buttoned-up Louise comes to her aid.  Needing now to escape the bloody situation they left behind, the pair put the pedal to the pavement, getting into one scrape after another on their way to god knows where; professional criminals they are not.  What waits at the end of the journey?  Nothing good, that’s for sure; the world wasn’t meant to let beautiful birds fly free.

What a bizarre movie, and I’m not sure I understand what the point is, or why it was even made.  Maybe the whole thing is supposed to be taken as a metaphor, sexism and violence and rape and male idiocy put on display, thwarted by our leading ladies, but they are ultimately trapped in a world that will never let them go.  Maybe it made more sense at the time, maybe I’m just not the right person to enjoy it, but my god was it a bad experience.  The moral aside, the actual bones of the film were all arranged in the wrong order, they were broken before the project began, and they were never strong enough to hold up the weight of the story.  Geena Davis might be the single worst actress of all time, but the rest of the cast wasn’t helping her much: Susan Sarandon as a caricature, Harvey Keitel with the accent from hell, Michael Madsen the b-movie king, Christopher McDonald the ultimate heel, and even Brad Pitt, in a small role that probably should have been sent to the cutting room floor.  You can say the same about most of the picture; I repeatedly had no idea why that edit was made, why that scene was there, why they did what they just did, why that line was said.  The entire thing was a disaster of bad direction, a huge stumble into a pile of shit, an error of such colossal embarrassment that I’m shocked it ever got into theatres, let alone into people’s hearts.