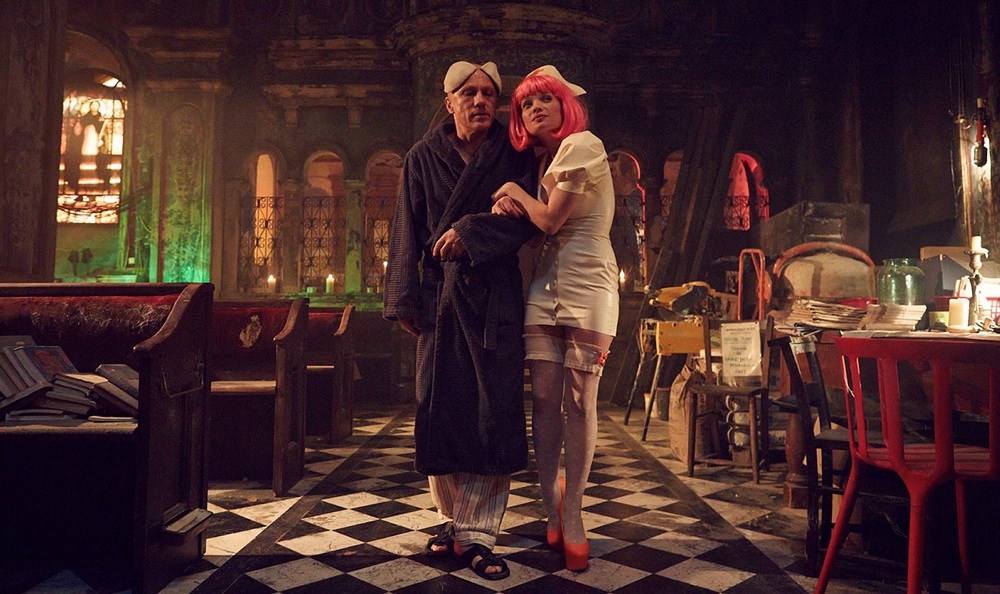 Terry Gilliam is my kind of guy.  Or at least, he’s the kind of guy who I’d like to imagine is my kind of guy, an odd & talented director/writer whose style always precedes him.  Not only is he part of the Monty Python team (though as more of a behind-the-scenes man than an actor, directing Holy Grail & The Meaning of Life, writing And Now for Something Completely Different & Life of Brian), but he also creates cinematic art all his very own that has become a stand-alone genre.  Time Bandits, Brazil, The Fisher King, Twelve Monkeys, The Brothers Grimm, The Imaginarium of Doctor Parnassus; you sit down to watch these movies and you’re smacked in the face by Gilliam, in a good way, exposed to a dark, loud, twisted style that’s never been duplicated, might feel brash, but will never bore.

The Zero Theorem is both trademark Gilliam in manner and a return to his roots, making it an instant classic for fans, though just another weird dystopian calamity for most.  In the indeterminable future, in an indeterminable place, Qohen leads an unimpressive life.  It’s not Quinn, it’s Qohen, pronounced like the last name, Coen or Cohen, becoming probably the most interesting thing about this strange little man.  He has no hair, talks about himself in the royal “we”, is waiting for a phone call to tell him the meaning of life, and works crunching numbers for a gigantic company run by a man named Management.  Unhappy with his job, his cathedral home, and himself, Qohen is about to get a task that may provide him with some purpose.  Management has chosen him to work on the Zero Theorem, an impossible attempt to prove that the universe has no point and that we are all, therefor, useless.

This film brings back Brazil with a bang.  Although, ironically, Brazil has a lot more explosions.  Regardless, there are a ton of similarities and it feels like Gilliam tries to return to his successes with this movie after a string of not-so-muches.  The weird future where nothing makes sense, the desperation to break free from the cycle, the cold-hearted upper class, the love story that might save the hero’s soul; it’s all very Brazil and even has a bit of a similar ending.  So you can predict how you’ll feel about this one if you saw that one, kinda.  The things lacking here are comedy & surprise, as it has a darker feel, a sadder feel, than other Gilliam films, and doesn’t help draw you out of the depression that is Qohen’s life.  Waltz & Thewlis are great, with a cool cameo from Matt Damon, but the movie as a whole is a hard thing to enjoy.  Brazil at least had some hope and some joviality; Zero Theorem is that movie with those things taken away.