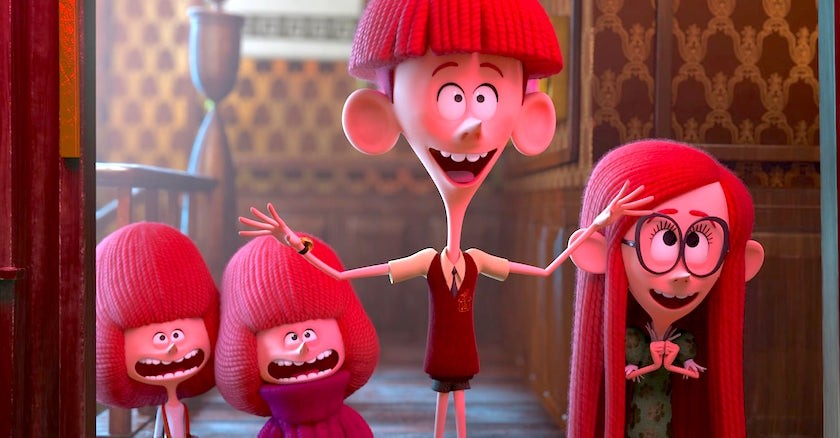 My son called The Willoughbys the weirdest movie he’d ever seen, and that’s saying something, because I’ve put that kid through some weird movies.  It’s a strange combination of Cloudy with a Chance of Meatballs 2, James and the Giant Peach, and somehow The Grand Budapest Hotel, a kids comedy with an old school feel and modern bizarrity.  It’s a rough 90-minute ride, with moments of perfect comedy and complete boneheadedness, based on a book that no one’s ever read by an author who’s done much better.  It’s up & down for sure, which could be a positive if you consider that everyone has the chance to enjoy some part of it, but it’s a select few who will enjoy the entire film the whole way through.

The Willoughbys are a proud family who have always been geniuses, and who have always grown wonderful red mustaches.  But recently their lineage has taken a weak turn in the form of a pair of parents who only want to be together to stare into each other’s eyes, with no time for impacting the world for the better.  Heck, they don’t even care to acknowledge their own children: Tim the eldest and most nervous, Jane the singer and dreamer, the twins who are both named Barnaby.  The Willoughby kids know that it’s up to them to restore prestige to the family name, starting with getting rid of their ridiculous parental units.  But this self-orphanization has unintended consequences, and leads to unexpected adventure.

The Netflix movie is based on a Lois Lowry book, and it definitely carries a Roald Dahl feel, which they reference, as well as Mary Poppins and other classics.  It’s brought to us by the guy who did Cloudy 2, with music from Mark Mothersbaugh, so the atmosphere is all over the place, as is the content and the plot.  It’s an odd mix of old fashioned and new, which again is referenced in the film, so it’s as if they knew all the problems they might face and decided to simply address them, which I think is laudable.  There are times that the action is pure hilarity, especially when led by Will Forte, who I think is a national treasure.  But there are other times when Maya Rudolph helms the ship, and that’s when the story suffers.  Her role is weird, the entire movie is a question mark, and although there are times to have fun, there are far too many times when you’re simply left scratching your head.