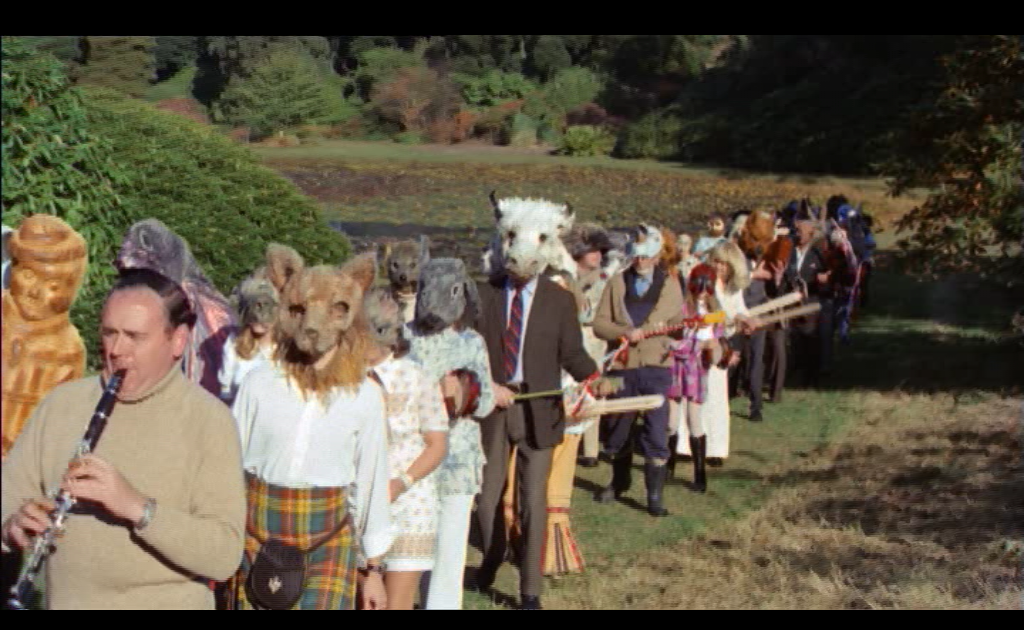 The Wicker Man is one of the strangest great films you will ever see, a precursor to Midsommar with an amazing 70s vibe that will carry you through all the gory details, until you come out the other side of the visionary tunnel a changed viewer.  I loved Midsommar, thought it was incredible, and now I understand it even more, because I see now not only some of the legends it was based on but also some of the cinematic foundations it was build upon, and none more impacting that The Wicker Man.  It’s weird, it’s bawdy, it’s scattered, it’s overt, and it’s one of director Robin Hardy’s only movies, like he stopped after making a masterpiece, and perhaps that’s exactly what this film is.

Investigating a disappearance, Sergeant Howie travels to the idyllic town of Summerisle from the Scottish mainland, after receiving word that a young girl named Rowan has gone missing.  But no one on the island seems to know who Rowan is or where she might have gone, including her own mother.  The atmosphere grows stranger the more the Sergeant learns about the local customs; not only their upcoming May Day celebration but their abandonment of the Christian religion and their penchant for making everything around them as sexual as possible.  What begins as confusing quickly grows to dangerous, as the mystery deepens and the pagan rites of Spring come creeping closer.

What’s most shocking about The Wicker Man might be that it’s a musical.  Imagine, if you can, a horror film about ancient sacrificial rituals being turned into a hippie commune community theatre production; yeah, I know, bizarre.  But that’s exactly what this movie is, a combination of terror and sing-a-long that will blow your mind, especially done in that specific, deliberate 70s style that some of us love so much.  Add in odd nudity and sexual themes, plus mad villagers and cool backstories, tie it all up in a bow and ring it round the Maypole, and there you have it, The Wicker Man.  Hardy tried to follow it up 25 years later, Cage tried to modernize it, but there’s no reinventing the wheel when it comes to something this unique and impactful.  Perhaps the only thing I didn’t like was Christoper Lee; I thought the scenes with him rather than the townsfolk felt out of place, didn’t carry the same vibe, and I wish that part had been done differently, which might have made me love this wacky film absolutely.  As it was, I’m bonkers for some bonkers, and The Wicker Man delivered; whats more, it’s still inspiring cinema generations later, and that might be the true testament to its greatness.