Movie Review – The Warrior and the Sorceress 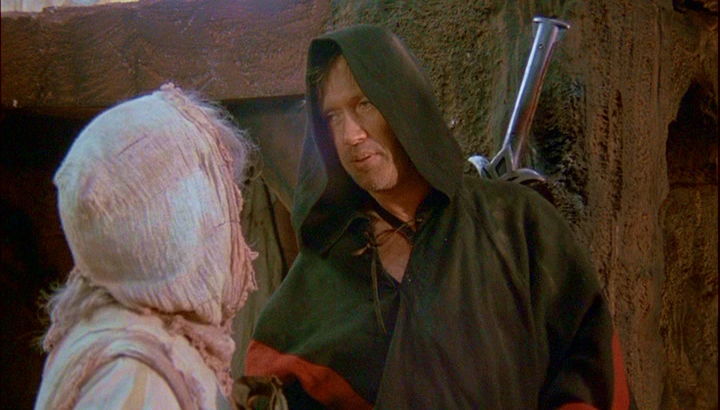 Movie Review – The Warrior and the Sorceress

Star Wars, Beastmaster, a Western, and “Mad” Max Rockatansky all walk into a bar, and what comes out again after a few hefty drinks is The Warrior and the Sorceress, a bastardized version of much that has come before, but in a new, drunken, reality-altered light.  Another addition to the 80s fantasy genre, this film has all the whack-a-doo pieces to solidify its place as a cult gem, but relies far too heavily on its contemporaries, since it has neither the talent nor the creativity to do anything on its own but bluster, bloviate, bang about, and then fall dead.

Kain, a roving warrior who was once part of a holy order, comes to a well in the desert and desires a drink.  But this well is guarded by soldiers fighting for the the tyrant Zeg, who in turn fights against the fat Bal Caz, who desires the well for himself.  The two men control two strongholds with the spring in the middle, and their constant battle with each other for dominance has gone too far.  The people are dying, a princess has been captured, slavers make a mockery of the struggle, and all is ripe for destruction, until Kain comes to save the day.

You’ll recognize a dozen movies here, which is almost fun to do, to pick them out one by one, but that doesn’t speak to the strength of the film itself, obviously.  I do think George Miller might have picked up some of what John Broderick picked up from him, because there’s a lot of Fury Road here too, which is kinda cool, in a bonkers sort of way.  The entire story takes place in one little area around the well, that’s really smart, all the action can take place there, and it’s so dumb that it’s almost fun.  But also, it’s so ridiculously awful that you can’t allow yourself to fully like what’s going on, even if you kinda want to.  Carradine is terrible, Socas is topless, and that rest tumbles into insanity far too much, leaving this particular 80s icon a bit broken.