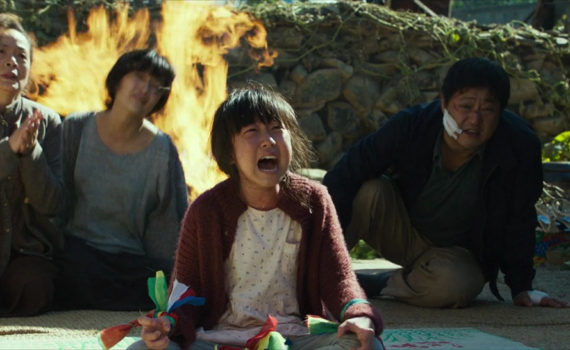 My critics’ group nominated The Wailing for Best Foreign Language Film of 2016, with audiences here and in South Korea raving about the quirky, twisted, darkly-entertaining mystery, critics and aggregates agreeing that it was a modern masterpiece.  It came out of nowhere, with Na, the director, taking a 6-year break between movies, having only helmed three ever, including this surprise hit.  All signs pointed toward an experience I should be upset that I missed, so I made sure to keep The Wailing on my list, to not let it slip by.  But although I’m glad I watched, I can’t join the throng in singing this film’s praises.  It’s basically a very confusing and very long zombie movie where demon’s do the infecting instead of killer viruses.  I’m all for that strange concoction, but the movie still left me feeling flat, unsure how I should react to something so bizarre.

In the small village of Goksung, South Korea, a series is gruesome deaths shock the community.  The victims are hacked to pieces, the murderers seemingly insane, but the epidemic only continues, with no real root surfacing to explain away the tragedy.  Police officer Jong-goo attempts to follow the trail, as patchy as it is, but this only results in his own daughter contracting the illness; a rash, increased hostility, and soon, violent tendencies.  The signs seem to point to a Japanese man who has recently come to the village, and who is rumored to be in the forest eating the animals, praying to some unknown force.  But when Jong-goo confronts this man, things only get worse, so bad that he hires a shaman to cast out the evil spirits from his daughter and stop the Japanese Man’s wicked ways.

It makes very little sense, even after the climax, even after reading a film summary.  I get what happened, at least the events of what happened, but I still don’t know why, or what, or which now?  The story is all over the place, with evil spirits and mistresses and policemen and priests and daughters and mothers-in-law; if you blink you might miss who is going into the woods to hunt down demons next.  And then there are the genres, so many genres, that this movie touches.  It’s a melodrama, a zombie movie, a horror flick, a comedy at times, a very unique South Korean point of view that’s refreshingly different than Hollywood, that’s for sure, but always an odd assortment of styles that didn’t keep me on my toes as much as it put me off balance.  I would have liked the film more had it been more grounded, more centered, or perhaps if I had been prepared by a friend before sitting down, like “man this is screwed up, just ride it.”  That might have made everything better, so if that warning helps you, then you’re welcome.