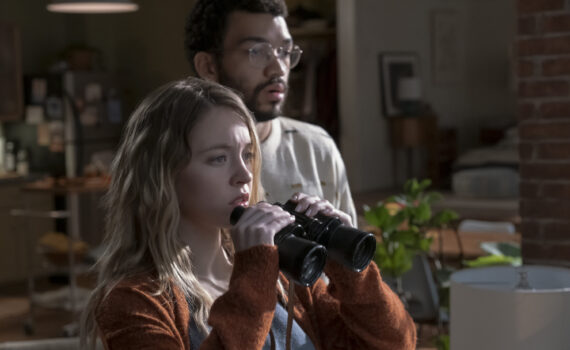 You know you’ve made a mistake when you make Fifty Shades Freed look good.  The Voyeurs is that bad; bad enough to land beneath the worst of the worst, and bad enough to embarrass itself completely.  And here I was thinking this was going to be a fun experience, a sexy evening, maybe even a critical metaphor; but no.  Any effort toward those goals is laudable, and there was some effort, I can see that.  But the execution and the decision making were both so abysmally horrible that any positives were drowned under the weight of a thousand bulbous negatives, until the entire project collapsed.  It’s not often that you watch one of the worst films ever, but when you do you know it; hello Voyeurs, I see you.

Pippa & Thomas have recently moved into a Montreal high rise together, their lives seemingly taking off to new & exciting heights.  She’s been in school forever but has now joined an optometry practice, he was in a band but now writes jingles, they’re young & in love; life’s great.  Their curtains aren’t up yet though, and across the way they can see right into another couple’s apartment, can see everything going on, especially all the sex.  At first it turns them on, then Pippa gets too curious, and soon she’s obsessed.  What she hears, sees, and thinks she knows will lead her down the rabbit hole to a place that’s so much less friendly than Wonderland.

For the first hour, I was intrigued.  Young couple, attractive neighbors, some sex, some voyeurism/exhibitionism; all good things.  And the story was pretty classic: think Rear Window, The Game, Girl on the Train.  Not groundbreaking, but kinda cool, and a little sexy, despite the very bad acting.  BUT, that’s when things took a turn.  The film pulls a 180º, goes whackadoo, and loses its audience completely as it tries to be something extremely clever, only succeeded in appearing desperately needy.  It needed to be cool, needed to be smart, needed to be edgy, twisty, metaphoric, and so it ended up none of those things; trying too hard can be a very, very bad thing.  The director wanted an allusion and he got one, but at the expense of taste, style, credibility, and good sense.  The actors couldn’t act, the “deep meanings” were too shallow to count as such, the sex wasn’t that good, and to say that I was left unsatisfied would be an understatement.  I would be suspect of anyone who thought this film was clever, fascinating, or good in any way; those people shouldn’t be trusted.