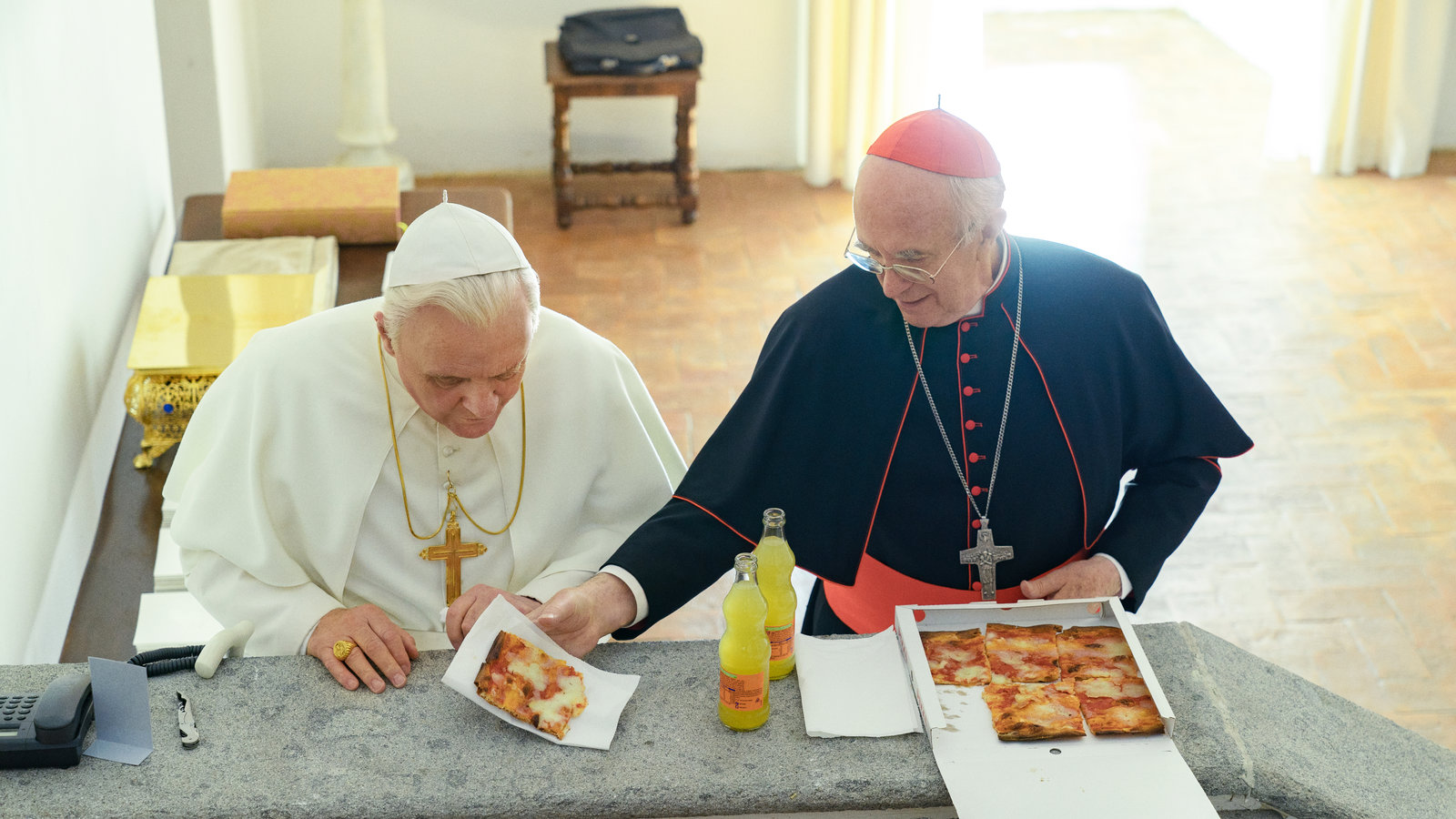 This is the part Jonathan Pryce was born to play, twenty-three years after another role as an Argentinian; Juan Peron in Evita.  Pryce is 72, only a couple years younger than Pope Francis when he took the took over the papacy, and he looks just like him; match made in cinematic heaven, forgive the blasphemy.  Anthony Hopkins, as well, is a similar age to Pope Benedict when the action in this film takes place, so it all works, and, really, you couldn’t have asked for two better actors to take this movie onto their shoulders and hold it their for two full hours with little else going on other than the occasional flashback.  That doesn’t make Two Popes amazing though, regardless of its talent; this Oscar-hopeful didn’t make as large a splash as it was expected to, failing to wow perhaps but also succeeding in telling a solid tale.

Conservative German Cardinal Joseph Ratzinger became Pope in 2005, although it wasn’t the landslide many expected.  Some voted for a more Liberal candidate, Argentinian Jorge Bergoglio, who was seen as a chance for progress.  But Ratzinger became Pope Benedict, and Bergoglio returned to his home country to do the Lord’s work, which in his mind meant helping the poor and compromising the Church’s stance on some very sensitive issues; divorce and gay marriage, among others.  Years later, when scandal rocked the Vatican, the two men would meet again and develop what could only be called an instant friendship, although their viewpoints could not be more different.  Fate would make them Popes at the same time in 2013, as Pope Benedict resigned and Pope Francis rose to power, but their relationship, and one pivotal meeting in Rome, would change history.

Pryce is incredible and Hopkins is a living legend; let’s enjoy that as long as these two men are working and thriving.  This Netflix original is a great time to celebrate their careers, because their individual talents are on display here for all to see; Pryce the lovable, Hopkins the irascible.  It was a perfect casting, and a well-constructed film, if a little heavy on the flashback and the self doubt, a little light on the gravity of the situation.  But that was a choice, depicting these men as mere men, old men at that, and only getting older.  I liked what I saw, but I was stopped short of love for many reasons, one being how much I despite organized religion, especially the Catholic Church.  But another being that the film is simply slow and plodding, taking too long to deliver a message that we could have heard quickly.  A more robust style would have served this movie well, but, alas, we have what we have.  Two Popes won’t be the Oscar-contender it was hoping to be, but you might hear its title pop up, or Pryce’s name mentioned, and there’s no reason to scorn that; I think a measured nod was well-deserved.