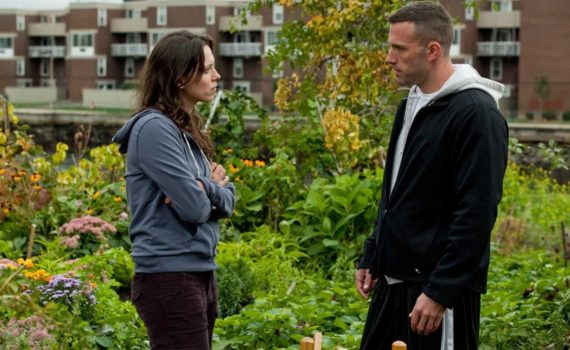 Ben Affleck has directed four films: Gone Baby Gone, The Town, Argo, and Live by Night.  Two of those were written by Dennis Lehane, one is an Oscar winner, and then there’s The Town, which seems like a Lehane novel and feels like an Academy Award contender, although ultimately it’s just a film that doesn’t get the credit it deserves.  This movie is the epitome of strong fiction; a story that could be real pulled off in such a way that you almost start to believe that it is.  And at the same time, it’s a fun, recipe-following, action flick that checks off all the boxes as far as entertainment value goes; what else can I say in this movie’s favor?  Affleck is more talented than he gets credit for, can direct as well, and knows how to pick ’em; The Town is a great example to all of that.

Charlestown, in Boston, MA, is home to the world’s bank robbing, armored car thieving, heist pulling dynasties, and the rest of the world isn’t even close.  In the Town it’s a way of life, you learn the trade from your father who learned it from his father and so on, so that planning out a stickup becomes second nature.  For Doug, it’s a life that he once almost left behind, but fell back into, and although he doesn’t want to follow his father to jail for life, he can’t seem to break the bonds that hold him to this unsavory career.  He, his best friend Jim, and two others rob a bank, taking a teller hostage in the process.  When Doug falls for her later on, he sees an opportunity to move off of the path he’s currently rushing down, toward destruction and decades in prison, if he can only escape the pulls of fate and of friendship.

For my money, this is Affleck’s best film, at least as far as directing goes, and it’s not far off from his best acting job as well.  He’s always been perfect as the Bostonian, ever since Good Will Hunting, and he slides right back into it here, with enough grit to satisfy and enough good looks to get us rooting for him to turn out as the good guy.  And then he surrounded himself with such immense talent that there’s no denying the abilities of his cast: Renner, who I’ve definitely never seen better, Hall, who is so much more than a simple romance addition, Hamm, who is so incredibly skilled.  Add in Chris Cooper, Blake Lively, Titus Welliver, Pete Postlethwaite, & Victor Garber and you’ve got one hell of an ensemble.  The plot is a perfect mix of things we expect and moments we’ll always remember, a great balance between levels that make us feel comfortable and layers that challenge the casual viewer.  The Town is just so cool, so specific, so familiar but at the same time fresh, a real reminder of the abilities of Affleck and of all involved, a film that I could watch again right now.