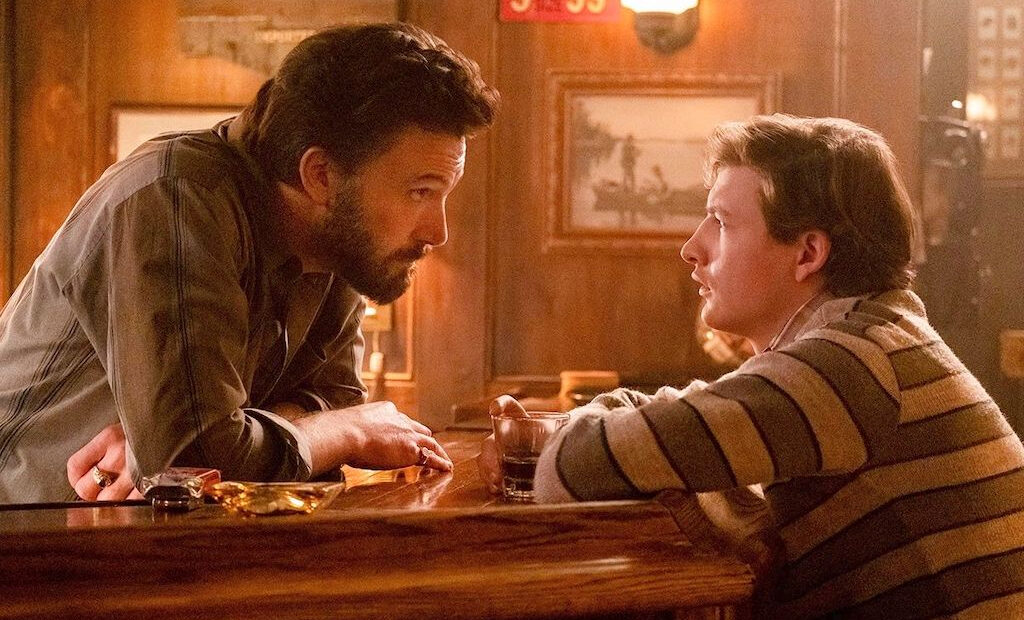 The Tender Bar is definitely much better than Hillbilly Elegy, but a similar problem exists in both, which has to do with extreme specificity and stories we really don’t care that much to hear.  Years from now, we’ll look back on this bizarre genre as a blip that didn’t need noticed; guy grows up in a dysfunctional environment in a certain U.S. locale, his family has idiosyncrasies and accents, he’s supposed to grow up to be a big shot because he’s smart, but really he becomes a writer, becomes the author of his own story, sells a book, and it gets turned into a film.  The major problem is I simply do not care, and it doesn’t look like other audiences really do either.

Junior, or JR to his family, has grown up listening to his father on the radio, but has never really spent time with the man.  This bothers him, it haunts his mother, and their lives have generally been miserable since, on account of a worthless 70s disc jockey who won’t pay his child support.  Moving back home to Long Island to live with family, JR & his mom try the best they can to move on, with much help from Uncle Charlie, who owns a bar and always seems to have good advice.  JR is smart, will go on to attend a fine college, but what he truly wants is to write about his town, his growing up, and the people who made him feel special, since those are the things that truly matter.

JD, JR, Tender Bar, Hillbilly Elegy; too similar, too specific, too hot-right-now, and just too crappy to be considered.  Books that are best-sellers that a just memoirs that I can’t really relate to that are made into movies; who are the people that are making these things happen?  These are bad stories made into bad films, and they just need to stop, stop, stop it already.  Now, Tender Bar has a few things going for it, some saving graces, and that’s OK I guess; great music, solid performances, a few key characters and moments.  But, generally, it’s something no one will remember in a year and also something we didn’t need to notice right now.  It doesn’t make a impact, skates by, entertains some, but has so little to offer than it’s almost insulting that it ever got made.  I found myself rooting for the family, I guess that’s not nothing, but it’s also not much, and when you craft a film there ought to be a stronger connection than that, there simply ought to be, and without it you’ve got footage but you don’t have film.