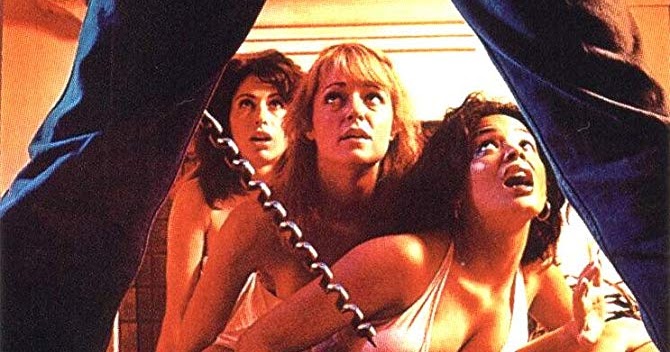 For an obviously terrible 80s slasher flick that’s basically just a ripoff of Halloween, Slumber Party Massacre is surprisingly solid, because it does two things very well: it gives a laudable nod to the genre and it delivers an underlying message that knocks you back a step when you finally understand what’s being said.  And the great thing is, while the positives exist if you dig for them, the film also revels in its own negatives, giving audiences what they have to come to expect from horror movies where a killer is on the loose and a bunch of teenagers have decided to raid their parents liquor cabinet.  SPM might be one of the lesser known psycho slasher franchises, but it’s still a ton of fun, and, as a bonus, comes complete with subtext.

In Venice, California, life is one big party; well, once the parents head out of town, and I guess until a murderer escapes from prison, finds a power drill, and starts putting holes in every one of your buddies.  That’s the story for Trish, a popular girl with a lot of friends, who just wants to host a sleepover while the parental units are away, unaware that a lunatic is on the loose until he starts his grizzly business in her house.  First he’s after the kids at school, then the guys who show up that night for a little action, and by that point he’s just whirring his drill at anything that moves and splashing blood all over the expensive carpeting.  Trish will have to fight to stay alive, with a little help from the new girl Valerie, who lives next door, didn’t come to the party, but won’t be able to stay away from the aftermath.

Slumber Party Massacre gets a lot right, and that’s a nice surprise.  Because, I mean, it’s still awful, it’s still insane, no one can act, no one knows what the hell they are doing, the effects are hilarious, this isn’t really a movie I wouldn’t say, it’s more an experimental haunted hay ride that’s basically copying off other, more successful haunted houses.  BUT, those of us who enjoy the genre despite and/or because of its deficiencies know that all this bad can somehow make a good, if the film is done properly, and I really think this one was.  Yes it recycles a lot of Halloween, but that’s OK, that’s the gold standard, it’s not a shock to see 80s flicks using that as a springboard.  What Jones did right though was jump high, show something original, and land solidly, for which she deserves all the credit in the world.  What’s going unsaid between the drillings is pretty interesting; unwanted sexual attention, abuse culture, male aggression, female objectification, all wrapped up in the metaphor of a lethal power tool.  So come for the boobs and the blood, that’s what the genre offers us, but stay for the questioning of your own desire to see those things, and walk away wondering if you just watched something special.  Then again, maybe not, maybe this franchise was begun to have fun, kill some co-eds, and say goodnight, which is fine too.