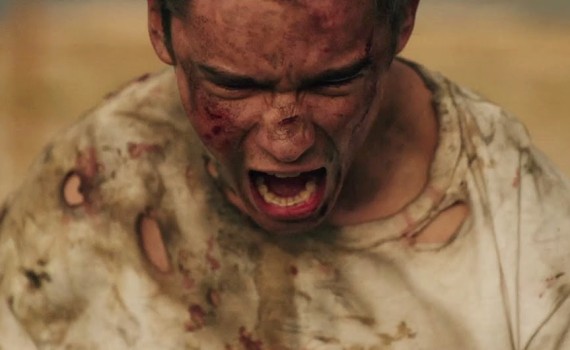 So many of us are so fascinated by sci-fi.  As a genre, it has the most to offer in the realm of imagination, without becoming something whimsical or impossible.  Fantasy can get a little out there, when the mind of an author or director creates an entirely new world, new languages, new customs, and new magic.  But sci-fi tends to stay a little more down to Earth.  Ironic I guess, since it so often deals with off-planet issues: space, time, aliens, dimensions, the future of robotics, collective intelligence.  Sci-fi intrigues us because it just might be possible, these stories that on the surface seem outlandish but at their core are based so often on fact.  The Signal is a film that fits the genre, using technology & extraterrestrial life to move the plot, reserving characters to play second fiddle.  The problem is  that the movie never feels like a movie, more like an extended episode of an old TV show, one that should have made its point quickly before we realized the low quality of the product we were watching.

When the beautiful, young Haley switches from MIT to a school on the other side of the country, Nic & Jonah go with her on a road trip that will dramatically change all their lives.  Nic & Haley are dating, a relationship that is breaking under the thought of distance, Jonah is Nic’s best friend, and the trio make for a fun team as they travel across so many miles.  But an old enemy is about to pop up and spoil their plans.  NOMAD, a hacker who broke into MIT’s computers and got Nic & Jonah in undeserved trouble, has tauntingly contacted them again.  The boys used their technological prowess to track NOMAD down, locating the scumbag, whoever he is, and finding that he’s not very far out of their way.  A quick stopover to blow his cover won’t take too long, and for Nic, who has an impending breakup and a recent medical condition, some steam could use blowing off.  But there’s much more to this hacker than there appears, and when the friends arrive at his creepy, abandoned cabin, they stumble upon a secret that was better left uncovered.

The movie plays out like an episode of The Twilight Zone or The X Files; an odd situation, perhaps a government conspiracy, maybe aliens, quick character introductions, a love story, and then a barrage of action toward the end.  The problem is, those shows packed a punch in 30 minutes, sometimes 60, and left audiences feeling dazzled & confused, but in a good way.  We enjoyed the ride, loved the sci-fi element, and moved on with our day or to the next segment.  The Signal elongated an idea that had been done before and attempted to turn it into something that it was never going to be.  It was part alien, part campy, part superhero, part Matrix, part video game, and always way too confusing.  The end clarified the story, but by then audiences had been subjected to a dozen slow-mo sequences when what we wanted was for the story to hurry the hell up.  Thwaites wasn’t awful, though his girlfriend was, Fishburne was the exact same as he always is, and Eubank’s amateurism shone through far too clearly.  This movie was a mix of too many ideas that needed to be delivered concisely and on their own, not rolled together and packaged as young adult sci-fi.  Read some Isaac Asimov instead, it’s better for you.