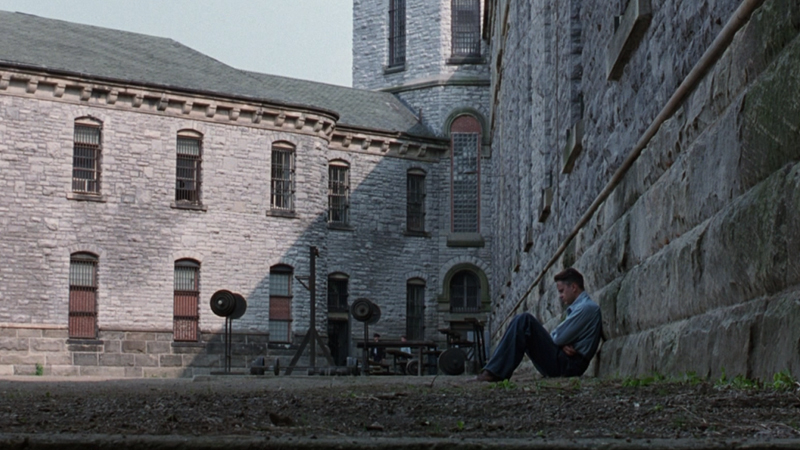 Listed as the #1 top rated movie on IMDb with 2 million votes and an overall score of 9.2/10, nominated for seven Academy Awards, one of only seventeen films to earn a 10/10 from esteemed film critic Olie Coen; Shawshank Redemption is quite possibly the best movie ever made.  When I speak in hyperbole like that my daughter always says, “really Daddy, is that just your opinion?”, but this time it’s basically inarguable; this story and the way it was seamlessly delivered only comes along and happens once in a decade, once in a generation, once in a century!  Ok, now I have gone overboard, but I can’t praise this film enough, it’s simply that special.  It deserves all the attention is has received over the past nearly 25 years, it has stayed immaculate over the course of time, and there’s no reason to believe that it will diminish even in the slightest were a millennium to pass; how’s that for hyperbole.

Andy Dufresne is the banker what killed his wife, at least that’s how he’s know inside Shawshank Prison, where he’s locked up for two lives sentences for a crime he didn’t commit.  As first, the other inmates don’t think much of Andy, this tall, quiet, educated man who holds himself above the daily grind of prison life, who doesn’t seem affected by the passing of the days.  But as they begin to know him, especially Red, a man who knows how to get things, they begin to understand that for Andy, hope hasn’t been completely lost.  He hasn’t given up on the idea that life can go on existing outside these four walls, that some day he might see the hay fields of his home town once again.  Red and Andy form a friendship that defies Shawshank, that casts out fear, and that will hold them up though the years inside drag them, like the weight of time, inexorably down.

Of course, this film is based on a Stephen King story, one of the best he’s ever written.  His novellas are little masterpieces; if you don’t have the time to devote to all his works, ignore the famous horror tales and focus on his shorter stuff, it’s tremendous.  The task was given to Frank Darabont to transform the tale into a movie, and wow did her ever do a job.  He would go on to also direct Green Mile, another soaring success, and although his name doesn’t get mentioned often (he was actually nominated for an Oscar for the screenplay, not for directing), we shouldn’t ignore the great task he undertook.  The cast is incredible; Freeman a perfect Red, Robbins with the role of his career as Andy, Gunton one of the most detestable villains of all time.  And you won’t be able to sleep without the music haunting your dreams, the cinematography sliding by your closed eyes, the overwhelming sense of joy and despair in tandem threatening to pull you into a whirlpool of emotion.  This is a film that all films can look up to, aspire to be, and fail to reach, because this kind of magic is fleeting.