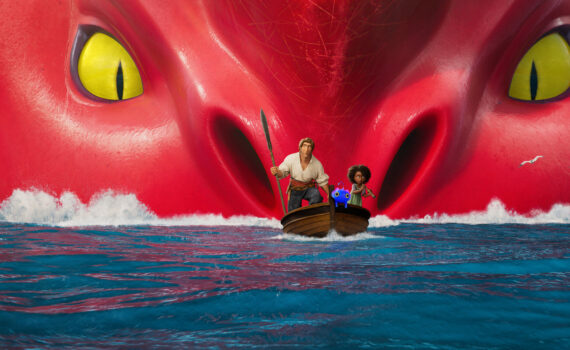 A Netflix original film, The Sea Beast is computer animation at its poorest and story at its most borrowed, yet somehow still a good-enough adventure for the whole family, a movie that doesn’t wow because it simply wasn’t created with a high enough ceiling.  It’s a streamable good time, and holds pieces that are rather good, at least until you recall where you’ve seen them before.  But, hey, my kids thought it was a cool story, there are some morals here that bare repeating, and everyone goes (or stays?) home happy.

Once upon a time, sea monsters weren’t happy wrecking sailing voyages, they came right up on shore, wreaking havoc and snatching screaming damsels right out of their bedroom windows.  That time of terror is over, thanks to the Hunters, who prowl the seas searching for these creatures, offering their heads & horns to nobility for a worthy prize.  A young orphan named Maisie wishes to join such a crew, and she falls in with the best of the best, Captain Crow and his right hand pair, Sarah & Jacob.  Off they go to kill monsters, but it will soon be revealed that the true evil was back on dry land all along.

The animation is …poor.  It’s that blocky computer stuff that looks so cheap, like the Pixie Hollow films, and that’s a lot like how this one feels, an offshoot Disney adventure that doesn’t stand a chance of comparing to its contemporaries.  Also, it’s a fairly obvious knockoff of How To Train Your Dragon, like really similar, with a Kristoff-from-Frozen hero feel that’s hard to shake as well.  These elements don’t help make Sea Beast great, but they do set a floor for it to be good, and that’s all it can really muster.  The story is interesting, the moral is clear, the voice work is rather nice, and it’s fun for the whole family; just don’t ask for more.