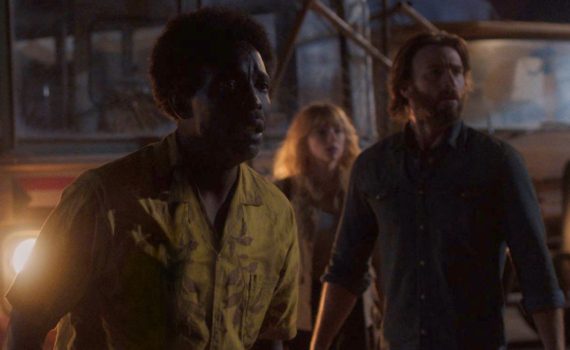 The Red Sea Diving Resort is about as far from one-of-a-kind as you can possibly get while still holding your head up and professing that you created something anywhere near original.  This is a formula we’ve seen a hundred thousand times, over and over and over again; recently Operation Finale and 7 Days in Entebbe come to mind.  You know the story and the drama as soon as it steps on dry land, and you wave as it swims away back where it came from, glad to know that you’ll see it again rather soon.  What pushes this movie up one step is Chris Evans’ earnest goodwill, a force that it definitely to be reckoned with and that you can feel flowing like life blood through an otherwise very tired (and very average) true-ish story.

In the 1980s, Ethiopian Jews were being killed in incredible numbers as the country warred with itself.  Their Jewish brethren in Israel knew that they needed to help, and Mossad agents were sent deep inside Ethiopia to bring those people in danger to safety, often making journeys of hundreds of miles to safe ports where they could be evacuated.  Ari Levinson, born a Jew, rescued in England, raised in America, sees it as his personal mission to continue to go back, no matter how dangerous, until the last man, woman, and child is saved.  His newest scheme to smuggle humans out of a country that wants them dead; an abandoned diving hotel that makes for the perfect cover story.  He and his team operate the resort like a full-functioning inn, all the while sneaking out at night to shepherd souls across the sea to safety.

Melodrama like this just isn’t good enough to force into a format that facilitates this true story.  It’s too important for this much of a lackadaisical effort, for this throwaway a formula, to be treated like a million movies we’ve seen before and will see again.  The crazy mission, the wacky team, the troubles they encounter, the people they meet along the way; it’s just too much, too done, too easy.  And what’s more, the actors play down to their parts, they don’t elevate their characters, and you start to wonder why you liked these people in other roles: Alessandro Nivola (Disobedience), Michiel Huisman (Guernsey), Ben Kingsley, Greg Kinnear, and don’t forget Haley Bennett, the worst actress to ever grace a screen.  The film is saved by having a heart-breaking true story, and by convincing us that we can make a positive difference in the world.  Also by Chris Evans, who you can tell put his heart into this movie, even if he would have been smarter taking his talents elsewhere.