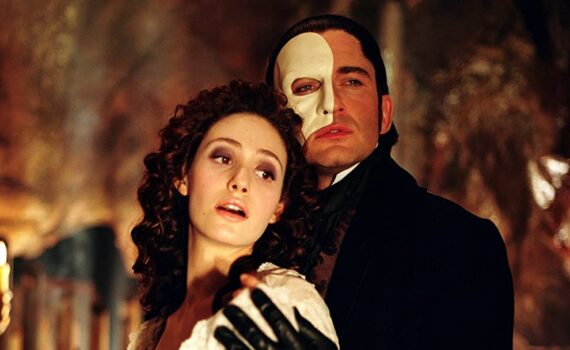 I could have sworn I reviewed The Phantom of the Opera before now; I’ve definitely seen it enough.  It’s the newest film version of a story that’s been told a dozen times, but never with Andrew Lloyd Webber’s music, which, of course, makes all the difference.  I’ve also seen this show multiple times on Broadway, which is without a doubt the preferred way to watch it; the movie really doesn’t even compare.  But, I will say that I always enjoy watching it, for the songs & the drama, and for the little things it does right, while also admitting that it does a lot wrong as well.

We arrive in Paris at the turn of the 20th century, and we hear a strange tale of a ghost, a man, a something, who haunted an opera house and claimed it as his own, while terrorizing its patrons and its players when his wishes weren’t their commands.  He also took a shine to a young orphan girl named Christine, who he trained as a singer from the shadows, until the day she was discovered and he was unmasked, leading to a reign of terror to gain back control of the theatre that would leave everyone scarred.

So, the musical is what you want to see.  It is classic, it is genius, it is art like you’ve never seen it before; it’s still mind-boggling that one man created all these amazing songs, songs that feel like they’ve been around for a 100 years.  This story is that old, older, and it’s a little stale with so many retellings, as well as this version being a little silly & all over the place.  The singing it fine, the acting is OK, the visuals are stunning, but it all comes back to Webber’s music, which is above critique, though some will try anyway.  Phantom is an icon, and although this film version isn’t perfect, it’s still lovely to experience.